Atiku Is Wanted In US For Corruption, He Can’t Go There Since 2006 – Obasanjo 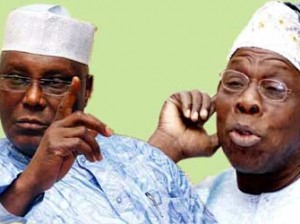 AFTER a long break, former President Olusegun Obasanjo and his deputy, Atiku Abubakar, seem set to renew their hostilities.

Obasanjo is insinuating that ex-Vice President Atiku is corrupt, saying he was investigated by his administration following alert from the United States.

He said Nigerians should ask Atiku why he has not visited the United States since he left office, if he has no case to answer.

Obasanjo, who bared his mind on why he moved against his deputy in an interview with the Economic and Financial Crimes Commission (EFCC) magazine, Zero Tolerance, said he could not understand why the anti-graft commission has not taken Atiku to court.

He said he did not at any time instigate former EFCC Chairman Nuhu Ribadu against Atiku.

“No; that is not true. We got a letter from America in June 2006, listing a number of people to be investigated; Atiku was one of them and that letter went straight to the EFCC.

“It was just shown to me because they will not be able to investigate my number two without my saying ‘ok’. So, I said if we got this letter from America, so be it.

“If we have agreement with FBI, Metropolitan Police and they are helping us and we are helping them and they write to us and say these are the people we want you to help us investigate, what do you think we should do? You as EFCC, what will you do, coincidence or no coincidence?”

He said Atiku had refused to travel to the United States since he left office because of alleged corruption.

He went on: “Well, I don’t know what the EFCC has found out about him, but I don’t know if he can go to America. Do you know? I am asking you, do you know?

“He travels? Travels to where? To Dubai? Let him go to America and return to Nigeria.

But Atiku could not be reached last night for his reaction. He was away in China.

His Media Adviser, Mallam Garba Shehu, said: “Turaki (Atiku) is in China and the time difference is about eight hours. There is no way I could reach him. You can run your story, we will react later. Turaki will wish to personally react,” he said.

The ex-President insisted that Ribadu was not his attack dog.

He denied influencing a report of the EFCC which led to the exclusion of some politicians from the 2007 election.

Obasanjo said: “No, no. Yes!. He brought a report to me and said these people are corrupt; how can I in my position receive a report that says these people are corrupt, and then I say ‘extol him as a governor’. Is that the type of leader you want me to be? I will not be that. So he brought a report; I didn’t ask him to carry out an investigation; he even came out and said he had found 28 governors as corrupt.

He said EFCC under Ribadu investigated him while in office to prove that nobody should be below board in the fight against corruption.

He said: “I was investigated. I told the EFCC to investigate me. I told EFCC to carry out a clinical investigation and they did it. They also did same with all the people on my farm. One of them was telling me the other day how Lamorde called him three times and took statements from him.

“The EFCC even made sure that they did not submit that report to me; they waited until I left and updated their report after going round the world and saying ‘look; this is the report’. Nobody should be below board in the fight against corruption.”

Obasanjo, however, became angry when he was asked why EFCC never moved against a former Chairman of the Nigeria Ports Authority (NPA) Chief Olabode George, until when the latter fell out of favour with him.

He added: “No, no, no; don’t say a thing like that; that is a stupid statement. I take very strong exception to that and if you are from EFCC and you say that, I think you should be removed and I mean it.

“Ribadu brought a report and a blanket report to us and we said, ‘look, if there is something wrong with NPA, you don’t crucify 50 people, go and get the leaders’ and, eventually, he got the leaders and the leaders happen to be the chairman, the Chief Executive who is from Kano and they were charged and they went to jail. And it is in the same report of Ribadu; now, if Ribadu is no longer there and you want to run him down, it should not be from you and I will not run him down.”

“I will say where I think Ribadu has gone wrong but where he is right, and he lifted that organisation, it should be acknowledged.

“He did very well until he lost his direction when he left. He did so well that he became a threat even to the incoming administration; that is what happened. He was so successful that his success began to be a problem for him.”

Although Obasanjo avoided rating Ribadu, he faulted the appointment of his successor, Mrs. Farida Waziri as the chairman of EFCC.

He alleged that Mrs. Waziri, was head-hunted by ex-Governor James Ibori and should not have been given the appointment. Mrs. Waziri defended this several time, says it was false.

He added: “I don’t know how to score him. I know that the woman they brought to replace Ribadu (Farida Waziri) was not the right person for that job, because I understood that one of those who head-hunted her was James Ibori. If James Ibori, who is now in a United Kingdom (UK) prison for fraud, head-hunted somebody who will fight corruption in Nigeria, then you can understand what happened.

He said he would reappoint Ribadu if he has the opportunity.

“Yes, I will reappoint Mallam Ribadu and I will not dismiss him the way he was dismissed from EFCC and one thing I will tell him, I will advise him not to go and hobnob with people he had declared as corrupt. Hobnobbing with such people does not do much credit to his image.”

Responding to a question, Obasanjo explained why he had been critical of the Federal Government’s fight against corruption.

He said political will is required to fight corruption in Nigeria.

But when asked whether the nation still has the political will, the ex-President simply responded: “Go and ask your president, not me.

He added: “I feel concerned about Nigeria and I will never stop feeling concerned and that is why occasionally I speak up.

“Even now, I am speaking up to say that all of you in EFCC, there are areas you should be ashamed of yourselves. If you take an organisation which took Nigeria from level 2 to level 43 and then it start coming down to level 34 then something is wrong. You don’t come and blame that on me; you don’t come and ask me that.”