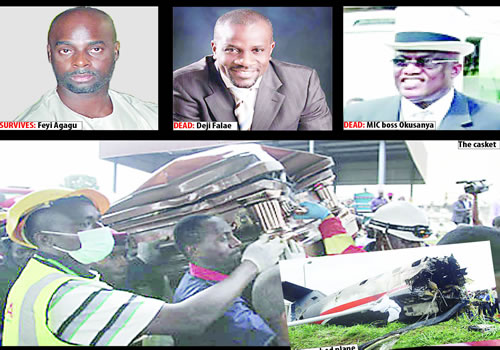 Facts emerged yesterday on the probable reasons the chartered Embraer 120 aircraft carrying the corpse of former Ondo State governor, Chief Olusegun Agagu, crashed on Thursday minutes after it took off from the Murtala Mohammed Airport, Lagos.

The ill-fated plane reportedly had 20 passengers, 13 of which died while the seven others were left in critical conditions. Among the casualties was the Ondo State Commissioner for Culture and Tourism, Mr. Deji Falae, who was said to be the eldest son of elder statesman and candidate of the AD/APP alliance in the 1999 presidential election, Chief Olu Falae.

Also dead in the crash were Mr. Tunji Okusanya, the proprietor of Nigeria’s most popular casket making/marketing outfit, MIC Funeral Company, his son Tunji Okusanya Jnr, no fewer than four of his staff, the pilot of the plane, Captain Yakubu and five others.

While the ill-fated 30-passenger aircraft was said to have only 20 people on board, a reliable aviation source insisted yesterday that the plane might have crashed because it was overloaded in some other ways.

The source, who pleaded not to be named because of the sensitive nature of the issue, told our correspondent that at the time it crashed, the aircraft had five-hour endurance fuel, which constituted unnecessary burden on the plane because it only needed just about a third of that quantity of fuel for a return trip from Lagos to Akure.

“The aviation expert said: “It is true that the plane is designed for 30 passengers and there were only 20 passengers on board, but it was loaded with too much fuel, and that is professionally wrong.

“The aircraft had five-hour endurance fuel for a return journey that would not take more than one hour.

“Remember that the aircraft was also carrying a corpse, and you know that the weight of a corpse is more than that of a living person. This combined with the weight of the casket and the volume of fuel in the aircraft probably weighed it down as it approached the air.”

The foregoing, the source said, was compounded by the fact that the two engines of the aircraft might not have been in perfect conditions. Hence, when one of the engines packed up, the weight of the aircraft became too much for the other.

“As it taxied for take-off, the pilot probably realised that the plane had lost an engine, but he believed that he was already at a point that we in the aviation sector call the “critical point of no return.” If he had aborted the flight at that point, the impact would have been much more.

“The pilot probably had to continue to go up or ‘ pull off ‘ in the hope that the other engine could take the aircraft to a level where it could return to land and abort the flight. But whereas it is possible to stabilise with one engine when an aircraft is in the air, it is very dangerous to take off or land with one engine.”

By the account of the airliners, the ill-fated aircraft’s last flight was in August while it underwent a A-check in June, meaning that it did not fly in the whole of September. The expert said this was probably so because the aircraft , usually used for chartered services, was not hired during the period, which underscores the need for vigorous check by ground officers who certified it fit to be airborne.

Explaining the various stages of control before an aircraft is airborne, the source said: “There are four stages of control. The first stage is on the ground when the necessary checks are made to certify the aircraft fit. The second is the tower stage where the control tower declares the captain free to take off.

“The third is the approach stage where the control tower monitors the aircraft to see that it stabilises. The fourth is the radar stage when the plane is airborne and communication between the pilot and air traffic controllers is possible.

“The aircraft was at the third stage which is ‘approach’ when it crashed on Thursday.”

The propeller aircraft belonging to Associated Airlines crashed into the disused compound of the Pipelines and Products Marketing Company (PPMC), a subsidiary of the Nigerian National Petroleum Corporation (NNPC) at the premises of the Murtala Mohammed International Airport around 9.32 am on Thursday minutes after it took off from the local wing of the airport.

The chartered plane had hit the wall demarcation and broke into two before it went up in flames after about 25 minutes.