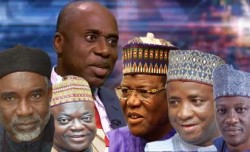 The future and prospect of new PDP hangs in the balance as she plays the role of beautiful bride in the politics leading to 2015.

The ground for a super coalition ahead of the 2015 general elections may have been established, with yesterday’s declaration of the Abubakar Baraje-led faction of the Peoples Democratic Party (PDP) that it feels “more comfortable” in the company of the All Progressives Congress (APC).

The faction said it shares with the APC a common goal of rescuing Nigeria from the precipice and putting it firmly on the path of sustainable development.

Yesterday’s declaration is coming on the heels of the visit last week of the leadership of the APC to four of the aggrieved G7 PDP governors, who they urged to team up with the opposition party to defeat the PDP.

In all the places, they got messages of hope.

Today, they are billed for Port Harcourt to visit Governor Rotimi Chibuike Amaechi.

In a statement yesterday, the spokesman of the New PDP, Chukwuemeka Eze, said:

“The presence of APC and New PDP leaders in large numbers at the Sokoto State University’s inauguration was a positive development, which raised hope for our fledgling democracy.

“It is a good example of politics of tolerance and cooperation, which we consider necessary if the country is to experience peace and tranquillity, without which there could be no development.”

The faction, however, stated that its romance with the APC is without prejudice to the ongoing negotiation between it and the Bamanga Tukur- led PDP.

It nevertheless expressed the hope that wise counsel would prevail in the protracted peace talks between the Baraje and the Tukur factions, with the latter meeting the conditions stated by the former.

Relishing its relationship with the APC, the Baraje faction continued: “Some have interpreted this to mean that a political marriage may be imminent between the New PDP and APC.

“While nothing is impossible in politics, it is necessary to state that we have not at this point closed the door on the on-going negotiations between us and President Goodluck Jonathan, who is also the national leader of our great party, PDP, the reformation of which is our preoccupation for now.

“The increasing closeness between leaders of the New Peoples Democratic Party (New PDP) and those of the All Progressives Congress (APC) has raised questions in the minds of many Nigerians and fuelled speculations on the possible merger of the two parties.

“Speculations along this line have heightened since last Tuesday’s inauguration of the Sokoto State University, where both APC and New PDP put up a strong presence, with our national chairman, Alhaji Abubakar Kawu Baraje, leading a high-powered team that included former Vice President Atiku Abubakar, Governors Murtala Nyako of Adamawa, Musa Kwankwaso of Kano, Rotimi Amaechi of Rivers and Sule Lamido of Jigawa; as well as our National Secretary, Prince Olagunsoye Oyinlola, former Osun State governor, to the event.”

“The chemistry between the team and that of APC, led by Gen. Muhammadu Buhari and Asiwaju Bola Ahmed Tinubu, was indeed unmistakable. The APC leaders have since then intensified the lobby for a marriage between both parties, even visiting some of our governors to directly invite them to join their party.

“All these visits on our state governors simply demonstrate our new status in the politics of Nigeria as the new bride of Nigerian politics. And we hope to play the role as expected of us, as we hold the key to Aso Rock come 2015.

“We heartily congratulate the administration of His Excellency, Governor Aliyu Wamakko, a good Ambassador of our great party, the New PDP, on this laudable achievement, and pray that Sokoto State University does not only experience a smooth take-off but also develop into a model centre of academic excellence.”

The meeting of APC leaders with Amaechi, according to a government source in Port Harcourt, will hold at the Government House in the Rivers State capital.

The source said Amaechi will be joined by his deputy, Tele Ikuru, commissioners and other top government officials.

Members of the National Assembly from the state, the 26 members of the House of Assembly loyal to Amaechi, leaders of the PDP and other allies of the Nigeria Governors’ Forum (NGF) chairman would also receive the APC chieftains.

The meeting, according to the source, will hold in the afternoon and a communique may be released.

.The APC leaders are visiting Port Harcourt at a time the Supervising Minister of Education, Chief Nyesom Wike, who is also the grand patron of the Grassroots Development Initiative (GDI) is moving round the 23 local government areas of Rivers State for GDI’s inauguration.