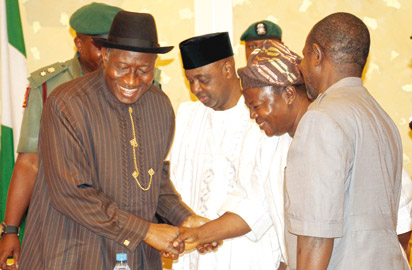 Details of the  Monday/ Tuesday marathon meeting  between President Goodluck Jonathan and the leadership of Academic Staff Union  of  Universities have begun to emerge.

We gathered on Tuesday evening that a key component of the agreement reached by the parties was  that the Federal Government  would  inject N1.1tn into public universities in the next five years.

A reliable source, who made this known, also hinted that the strike would be called off anytime next week.

He  said the government team which was led by President Goodluck Jonathan would release   N220bn yearly into the sector beginning from 2014.

The source added, “The meeting should be the longest that we have ever had on this crisis but I can tell you that both parties were frank all through the discussions.

“The parties also showed commitment towards ending the crisis. The President in particular showed that he was serious about ending the strike and that was why he offered to release over N1tn to the universities in the next five years.

“The money will be released on a yearly basis at N220bn per annum beginning from 2014. For the outgoing year, the  government will only release N100bn and this has been processed.”

He said that the government, in order to show its commitment to a fresh pact, accepted that “the fund(N1.1tn) should   domiciled at the Central Bank  of Nigeria”

“The  money will be released on a quarterly basis to the universities. So, there won’t be any problem about funding the deal,” the source said.

The National Universities Commission and the Trade Union Congress, according to him, will be the  joint guarantors  of  the  agreement while the Minister of Education will  be the implementation officer.

The source also said  that the government   agreed among other things, to revamp the public universities by ensuring that all those issues that always led to strike were dealt with once and for all.

It was  learnt that the negotiating team of ASUU  led by  Dr. Nassir Faggae met on Tuesday night to further  deliberate on the  deal.

Though the details of the meeting  were  not known as of 11.22pm on Tuesday,  it was gathered that ASUU might call a National Executive Council meeting on or before Saturday where the   deal would be tabled  before  all its  branch executives.

Jonathan had  while  shaking hands with Fagge after  the marathon  meeting  in the Presidential Villa, Abuja   said, “My President, I hope it (strike) will end today(Tuesday). Our children have suffered enough. We must find a solution.”

All those in attendance responded with a loud “Amen.”

When greeting Omar, he  said, “My President with you around, there will be no problem; our agreement is signed, sealed and delivered.”.

Faggae told State House correspondent on his way out of the Villa, that  his team  would take back a  message to  varsity teachers   before  a decision would be taken on  the  next line of action.

“We had a lengthy meeting with Mr. President, and we looked into how best to address the problem of university education in this country. We now have a message from Mr. President that we are going to take to our members and we are expecting that our members will respond appropriately to his message,” he said.

Fagge added that  since the message was meant for members, he would not divulge it to the press.

When asked whether  university teachers would be called upon  to return to the classrooms, he said that the decision was left for them  to take.

When further asked if he was impressed by the President’s message, Faggae  cautioned  journalists  against putting words  in his mouth, insisting that only ASUU members would determine that.

The Minister of Labour, Chief Emeka Wogu, who listened to Faggae’s encounter with journalists, later said progress was made during the discussion.

He said, “We made progress. The President of ASUU told you that they are going back with a message from the Federal Government back to their members and the message is full of high expectation and hope.”

When asked whether ASUU would  call off the strike, Wogu  said that was why he described the message as full of expectation.

“Our prayer is that they will come back with positive outcome. They might even not come back to meet us. They might take decision there that will meet your expectations “ he said.

He added that the offers made by the government during the meeting were those  that were in line with the contentious  2009 agreement.

He said since the issues that led to the strike bordered on the 2009 agreement, the government did not go beyond the pact.

The President was joined at the meeting that started at 2.40pm  on Monday by Vice-President Namadi Sambo; Minister of Finance, Dr. Ngozi Okonjo-Iweala; the Secretary to the Government of the Federation, Anyim Pius Anyim;  the Supervising Minister of Education, Nyesom Wike;   Wogu among others.

The marathon meeting  was  the first   between ASUU  and Jonathan since the   strike  started. The Presidency took over  the negotiations with ASUU on  September 19  with Sambo  in charge.