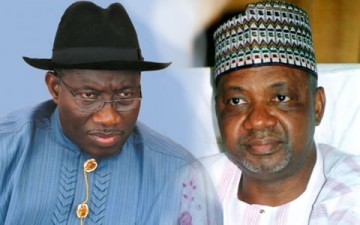 Two crucial meetings aimed at resolving the crisis in the ruling Peoples Democratic Party which led to the recent defection of five governors were held inside the Presidential Villa,  Abuja on Sunday.

While Jonathan met with the aggrieved governors inside the First Lady’s  Conference Room in the Villa;  Sambo and the other governors met in  House Seven.

The Jonathan, Aliyu and Lamido’s meeting which ended at about 10.29pm  was adjourned till  Sunday.

The Chairman of the PDP  Board of Trustees, Chief Anthony Anenih, who briefed State House correspondents at the end of the meeting said Jonathan, and the rebel governors were happy that they were moving to restore confidence and trust in the PDP leadership.

“We have had our meeting presided over by the President with the Vice-President in attendance. We had useful meeting, the summary of it all is that we are happy that we are moving to restore confidence and trust. There will be a series of meetings between now and the weekend,” Anenih said.

Lamido restated his position that he would remain in the PDP.

“I stand by my principles which is one Nigeria which is based on law and order,” he said.

Aliyu also said he attended the meeting because he was still a member of the PDP.

Sambo,  Wada,  Imoke  and Akpabio joined the meeting before it ended.

The meeting between the Vice –President, the other PDP governors and  the two deputy governors  had ended at about 8.30pm.

None of those who attended it was ready to speak with journalists.

Akpabio, who   said the meeting was at the instance of the Vice-President,  declined to  state what they discussed.

Sambo was joined at the meeting by the Secretary to the Government of the Federation, Senator  Anyim Pius Anyim and the Chief of Staff to the President, Chief Mike Oghiadomhe.

The  deputy governors of Niger and Kaduna  were in attendance.

The governors drove to the venue in  a group from the Akwa Ibom State Govenor’s Lodge in Abuja where they had met earlier.

At  the meeting  held by the  11 governors and the two deputy governors  at the Akwa Ibom State Governor’s Lodge,  before they headed for the Presidential Villa, five of their colleagues were not in attendance.

The five, who neither sent their deputies nor  gave reasons for their absence,  were  Lamido, Garba Umar (acting Governor  of Taraba State), Usman Dakingari ( Kebbi),  Ibrahim Dankwambo( (Gombe) and  Gabriel Suswam(Benue).

A source at the meeting   told one of our correspondents that the 11 governors and two deputy governors took issues they discussed at Akwa Ibom State Governor’s Lodge to Sambo.

Topmost were     the defection by  Amaechi, Wamakko , Ahmed, Kwakwanso  and  Nyako  and its implications for the PDP.

The source, who is one of the PDP governors, said that they also discussed how to stem the  crises in the party and how to make sure that Aliyu   and  Lamido  did not defect to the APC.

The  source  added, “The governors are not comfortable with the gale of defection in the party and that was why we decided to meet .When we leave here, we might meet  with President Godluck Jonathan  or Vice-President Namadi Sambo this(Sunday) evening.

“We need to reposition our  party and that is what we are going to tell the President or the VP. “

He said  they  never thought  that the aggrieved governors would ever defect to the APC,which they considered as arc enemy.

“We were astonished to hear that they have moved to the APC. It is  bad and this implies that they are ready to team up with our enemies to send us out of power.”

It was also gathered that the governors accused the    Bamanga Tukur-led National Working Committee of overheating the party by suspending chieftains without consultations and   National Executive Committee meeting.

The governors, it was also gathered, lamented  that the PDP NWC had refused to hold NEC meeting months  after the August 31 mini-convention of the party.

Our source added, “We are not also happy about developments in the party.

“We are aware that no member of the party ought to be suspended more than a month and that it must therefore be ratified by NEC.

“But this NWC is just operating as if members are sole administrators of the party. They have refused to call for NEC meeting, yet they keep on suspending people without recourse to NEC and the constitution.

“We  have not   even ratified the   Disciplinary Committee the NWC  set up. This is wrong. We need to correct it.”

It was also gathered that the PDP governors discussed the issue of the economy, which they said was bad.

They allegedly said the opposition was already using the bad state of the economy to woo the electorate.