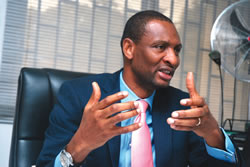 Following the backlash which trailed CBN Governor, Sanusi Lamido’s letter to President Goodluck Jonathan, disclosing that the NNPC is owing $49.8 billion dollars, an amount which analysts have said is enough to cover the nation’s budget for three years, Economist Femi Awoyemi has cautioned Nigerians to focus on the key issues and not the controversial exchange between the two agencies.

Speaking on Channels Television’s breakfast programme, Sunrise Daily, Mr Awoyemi stressed that the implication of the disagreements between the two agencies puts the Nigerian economy at stake as well as the integrity of those who occupy offices.

“Sometime in June/July 2013, CBN had the pre-shipment inspection documents and found out that about 600 million barrels of oil had been shipped out, and from his records he would have expected about 65.3 billion dollars but what he got in was about 15 billion dollars.

“Normally, when you have such discrepancies there would be an exchange between the CBN, NNPC and thereafter with the Ministry of Finance.

“If this had been done and they did not get any answer, it is consistent therefore for Central Bank to then escalate the matter. My own interpretation would be that, it was therefore escalated by writing to the president.”

The economist who adjudged the CBN governor’s move as right because all the agencies report to the president, said that all agencies involved should have been summoned by the President considering the amount of money alleged to be missing, which is up to the nation’s budget for 2 years.

“If the figures were true, we are talking about Nigeria’s budget for two years aggregated together,” he said.

“The letter finding its way into the public domain should trigger a sense of responsibility knowing well that it has a huge impact on Nigeria’s economy, financial standing and rating especially to the global society,” Awoyemi said.

Awoyemi said the proper action would have been for authorities to clear the air and allay fears but “since we are in a system where we trust each other less, it took a political undertone.”

Despite the severity of the crisis at hand, many have said there is a disconnection between the two agencies which can create suspicion in the minds of the people.

Reacting to NNPC’s claim that the CBN is ignorant of the structures by which it remits revenue to the Federation Account, Mr Awoyemi said:

“If the Central Bank of Nigeria does not therefore understand the way and manner in which the NNPC is structuring its businesses or enough to understand what it is expecting in the Federation Account or how those monies get back to it, then that’s a key issue Nigerians should be interested in knowing.”

“It is a discrepancy more in processes and understanding of how affairs are conducted,” he added.