200 Chibok Girls For Release Next Week, Behold, The Journalist Who’ll Make It Happen! 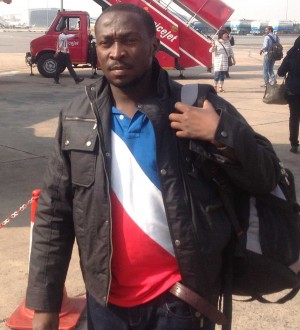 All things being equal bring back our girls sing song will end next week. There are indications that Federal Government of Nigeria is having a rethink on dialogue with Boko Haram in order to get the girls back alive! THE Chief of Defence Staff, Air Marshal Alex Badeh, has said that the military will not use force to rescue over 200 schoolgirls abducted by Boko Haram on April 14 because of the need to save their lives.

He said, “We want our girls back; our military can do it, but where they are held, we cannot go with force.

“If we go with force, what will happen? they will kill them . So nobody should come and say the Nigerian military does not know what it is doing. We know what we are doing; we can’t go and kill our girls in the name of trying to get them back. So we are working.

“The good news for the girls is that we know where they are but we cannot tell you military secrets here. Just leave us alone; we are working and we will get the girls back.”

When prodded by journalists to expatiate on what he meant “that ‘the military would not use force’’ to free the girls, the CDS replied, “That would be telling you our secrets and our strategy. We cannot discuss our strategy in the open.”

He said the military had the capacity to carry out any mission as exemplified in its roles in the restoration of democracy in Liberia and Sierra Leone.

Badeh said the insurgence in the North- East was different as it involved the killing of fellow Nigerians, which according to him, was not what the military was happy about.

The CDS stated also that some arms recovered from insurgents showed clearly that some people outside the country were fueling the violence with the aim of destabilizing Nigeria.

He said, “Some of the arms we have recovered are very alien to the Nigerian Army, which means there are people from outside fueling this thing.

“That is why when Mr. President said we have al-Qaeda in West Africa, I believe it 100 per cent because I know that people from outside Nigeria are involved in this war.

“They are fighting us; they want to destabilise our country and some people in this country are standing with the forces of darkness. We must salvage our country; we must bring sanity to our country.”

Badeh, who commended CISA, urged Nigerians to support the military to overcome the current security challenge in the country.

He said that President Jonathan was solidly behind the military and had empowered them ‘‘to do the work.’’

Badeh said, “What this is showing is that people have finally realised that you don’t have another military apart from this one that you have. And it is either you support your military or you are looking for anarchy (sic).

“This war is not fought by military alone. This war is fought by Nigerians. Nigeria is at war, all hands must be on deck. If you can’t do anything else, but you have mouth, you can support the military and not disparage the military because you don’t have another one.”

The National Coordinator of CISA, Chidi Omeje, who delivered the group’s letter of solidarity to the CDS, said the military deserved the encouragement of the citizenry.

He noted that many military personnel had been killed while fighting to enthrone peace in the North-East and other troubled parts of the country.

The New York Times had quoted a foreign diplomat as saying that the Army was hampering the hunt for the abducted schoolgirls.

Meanwhile, a British newspaper, The Mail on Sunday, has reported that the kidnapped girls came close to freedom recently before government officials called off a deal to swap them for detained Boko Haram members at the 11th hour.

It quoted security sources as saying that a Nigerian journalist, Ahmad Salkida, trusted by both the government and the sect leader, Abubakar Shekau, acted as a go-between.

According to the newspaper, the officials scrapped the exchange in a telephone call from a crisis summit in Paris, France where Jonathan met foreign ministers, including those from Britain, the United States, France and Israel.

Shekau was said to have been enraged by the U-turn after it was agreed after the Paris summit that no deals should be struck with terrorists and that force should instead be used against them.

The Mail on Sunday quoted an intelligence source as warning on Sunday that “the next video we see from the terrorists could show the girls being killed one by one.”

It said sources in Abuja described how Shekau had agreed to bring the girls out of the forest camps in the early morning and take them to a safe location for the prisoner swap.

‘‘They would have been dropped off in a village, one group at a time, and left there while their kidnappers disappeared. There was to be a signal to a mediator at another location for prisoners,” one of the sources said.

President Jonathan met with the foreign ministers to discuss the crisis and a potential move forward.

Sources said Salkida was able to travel by taxi to the group’s forest camps to talk to Shekau two weeks ago. ‘‘His mission was secretive and dangerous,’’ they said.

One of the sources said, ‘‘He is probably the only civilian with access to Shekau. There is trust between them and Salkida had only one aim – to get the schoolgirls out.

‘‘He reported afterwards that the group of girls he saw were alive and well, and being adequately fed and sheltered. They told him all they wanted was to go home.’’

The Mail on Sunday said that presidential spokesman Reuben Abati denied knowledge of the rescue plan.

‘‘I am not aware of an attempted rescue plan taking place last week,’’ the newspaper quoted Abati as saying.

Abati also told one of our correspondents in Abuja on Monday that he was” not aware of an attempted rescue plan taking place last week.”

We gathered however revealed that Salkida actually met with Jonathan one-on-one to discuss the arrangement.

The meeting was said to have taken place inside the Presidential Villa, Abuja sometimes last week.

It was gathered that the mediator was led to meet the President by a male minister from the Northern part of the country (names withheld).

Our source said, “I am aware that the journalist in question met with the President last week. I think it was on Tuesday that the minister brought him to meet the President.

“It was a one-on-one meeting and the journalist left with the minister about an hour later.

“I guess that meeting was arranged to build the confidence of the young man (the mediator) that whatever he must have been discussing with government officials has the backing of the President.”

The source however said he was not in position to know if the negotiation had been halted or not.

Salkida is said to know Boko Haram leaders and has unprecedented access to them.

He had been arrested on several occasions accused of being a Boko Haram sympathizer before he fled with his family to Dubai, United Arab Emirates, two years ago.