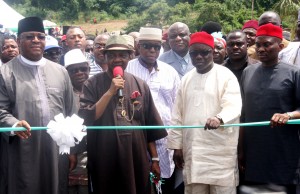 PRESIDENT Goodluck Jonathan has commended the administration of Dr. Emmanuel Uduaghan on the giant developmental strides it has achieved in Delta State.
Dr. Jonathan bared his mind on the visible achievements of the administration of Governor Uduaghan while commissioning  the Utor Bridge on the Asaba-Ebu-Uromi Road which will ease movement from the eastern part of the country to Abuja by more than two hours. Represented by his Vice, Arch. Nemadi Sambo and accompanied by the Governor of Delta State, the President observed that Dr. Uduaghan has delivered on several critical sectors in the state.
“You (Uduaghan) have created the enabling environment for development to take place, you have the transport sector, you have transformed so many areas and it is highly commendable and we will continue to partner with you in this direction,” he said.
President Jonathan explained ‎that “the commissioning of this bridge is a re-affirmation of this administration’s commitment to improve on the infrastructure base of the country,” adding, “it is gratifying that the completed bridge is positively impacting on the people of the immediate community and other Nigerians.”
The Minister of Works, he disclosed has been directed to commence the design of a dual carriage way on the road to facilitate movement of people and goods to different parts of the country.
“We have asked the Minister of Works to commence the design for the dualisation of the road,” the President said while reiterating his administration’s commitment to partner with the private sector in the development of the country.
Dr Uduaghan had on his part commended the President Jonathan’s led administration for transforming the country and challenged the Ministry of Works to showcase President’s achievements.
According to him, “this is an era we need to showcase the many achievements of the President, we thank Mr President for speedily completing this project.”
The Governor noted that the bridge project was very important because it will facilitate movement between the people of Delta and Edo States, adding, “three quarter of the people in Edo State and those in Kogi State can now make use of the airport (the Asaba International Airport).”
He used the occasion to call on the Federal Government to device means of regulating weight of vehicles that ply the roads, observing that the durability of the roads were been affected by the weight of the vehicles that  ply them.
“We need to regulate the weight of the vehicles that ply this road for the road to last . This road is very important to us that is why we are also constructing a flyover at the Inter Bau Roundabout because we are envisaging a lot of traffic on the road,” the Governor said.
The Minister of Works, Arch. Mike Onolememen had in his welcome address said the Utor River Bridge on the Asaba-Ebu-Uromi Road cost the Federal Government N4.4 billion and would facilitate free flow of vehicles, people and materials and thanked Governor Uduaghan for his cooperation which facilitated the completion of the bridge.
delta delta government delta state election 2015 emmanuel uduaghan Goodluck Jonathan Jonathan nnamani sambo politics slideshow uduaghan vice president 2014-10-20
YouNews
Share