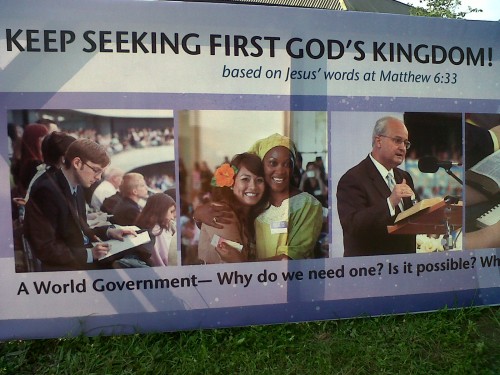 Weeks-in-week-out, this year Regional Conventions of Jehovah’s Witnesses across the Country, have been attracting unprecedented attendance. With the theme:- Keep Seeking First God’s Kingdom! The Convention series began last weeks of September in Nigeria and billed for Twelve weekends in most locations.

At Ota, Lekki, Daluwon, Badagry, Fatumo – Ibadan, and other Cities where it had started – average 6,000 and sometimes more have been attending. Attendees included Delegates and non Witnesses. We gathered that everyone may attend and you won’t be charged admission; no collection will be taken. Globally, more than Seven Millions of Jehovah’s Witnesses and their Guests attend conventions each year.

For Ilerin – Ilesha Convention ground in Osun State, Seven weeks have been slated beginning from the last weekend in October. Paul . A. Oyebisi a Spokesperson for the Region told us “This years convention is unique and significant in so many ways. Its been well advertised. We eagerly awaits spiritual refreshment. The programmes will be presented in English for some weekends and Yoruba Language for the rest”.

Speaking on the attractions for massive but peaceful crowd with different set of Delegates each week at different locations, Afolabi Odeyemi a Convention Spokesperson in Lagos said ” Many program part features reenactments, practical Bible based talks and video demonstrating application of Bible principles. It also features two theatrical productions which bring Bible stories and a modern day Drama to life.”

“One of the highlights of the 3days program is a comforting Bible Discourse entitled – Earth’s New Ruler – Who Really Qualifies; its for delivery on Sunday morning”…. The seven symposia and other true-to-life, real solution to life challenges are the magnetic factor. Preceeding each convention series are well orchestrated campaign inviting friends from door-to-door locally. That too must have obviously contributed to the turn out.

On the growing numbers of Jehovah’s Witnesses in Nigeria, Mr Afolabi Odeyemi stated ” For the growing multitude, conventions cannot hold in one location. It’s logically and practically impossible… From a humble beginning towards the end of 1921 when Jehovah Witnesses faith reached Nigeria with a group of 15 People in 1923, there has been a truly heartwarming response to the evangelising work. As at 2013, there are 351,205 Active Witnesses in the Country.

Each year, Jehovah’s Witnesses hold conventions around the world. Millions attend. Conventions offer those present an opportunity to experience the many expressions of love, joy and peace of brotherhood. Between sessions Delegates cheerfully talk and eat together, exchange simple gifts and contact information, take photographs and affectionately embrace one another.“