Adeboye, Oyedepo In Dilemma Over Jonathan’s N6Billion Gift To Pastors 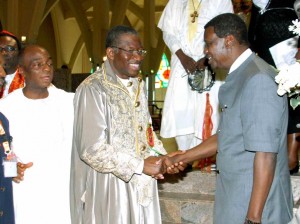 Amaechi has revealed that Jonathan gave N6billion to Pastors for Feb 14, and Tunde Bakare is criticising his fellow Pastors.

Pastor Tunde Bakare has criticised CAN and PFN for endorsing President Goodluck Jonathan for the 14 February presidential election at the expense of one of their own, Prof. Yemi Osinbajo, the running mate to the All Progressives Congress, APC, presidential candidate, Muhammadu Buhari.

Pastor Bakare in a sermon titiled “The Sweet And Sour Ministry Of The Prophet”, said ”some of the compromising Christian leaders he often described as palace prophets, were only after their pockets, which was why they have queued behind Jonathan and rejected their son.”

He explained that “a prophet is sent to bring change not build consensus,” adding that“whenever you compromise what is right in order to gain acceptance with men, you lose acceptance with God.”

The Leaders of CAN and PFN had met at the Redemption Camp of the Redeemed Christian Church of God, RCCG, to pray for the nation and the forthcoming election, but the meeting turned out to be for a secret endorsement of Jonathan’s candidacy.

Pastor Osinbajo was also at the meeting to seek their blessing to support him and the candidacy of General Muhammed Buhari.

Pastor Paul Adefarasin was said to have broken the silence when he asked Adeboye who they should support since his ‘son’, Pastor Osinbajo is vying for the vice presidency with Buhari. They wanted Aeboye to say something and Osinbajo was watching as he believed that ‘Baba’ will certainly ask other leaders to endorse him, but he was disappointed

Adeboye was said to have told them that he is a man under authority and that since he is under the authority of CAN and PFN, whoever they endorsed, he would support and go with them.

It was then that Oyedepo stood up and said he had prayed and that God was leading him to endorse and support Jonathan and that was the script the Christian leaders adopted at the expense of Osinbajo.

Instead of the meeting being for prayer for the nation, it was gathered that it turned out to be for the secret endorsement of Jonathan as all the leaders present except Osinbanjo agreed that CAN and PFN should go with Jonathan.

Osinbajo was not allowed to address the Christian leaders, giving the excuse that since the other contesting party was not present, they would not allow him to address the audience.

He was said to be downcast as his own rejected his aspiration.

The visit resulted in an alleged threat by Bishop Oyedepo to open the gate of Hell on those who opposed Jonathan. The Bishop has however denied the allegations , describing them as as an attempt to rubbish his reputation.

Previous Be Inspired! Nothing Should Stop You To Succeed… See Limbless Man Raising Family
Next PDP Presidential Rally In Asaba