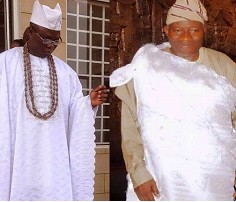 The National Coordinator of a Yoruba group, Odua Peoples Congress, Gani Adams has come out to say Yes, He is working for Jonathan for approving a contract for the OPC to protect pipelines across the South-West.

Adams said the contract would provide at least 5,000 jobs for his boys and 10,000 jobs for other youths in the South-West.

He said this while reacting to the allegation by the APC that Jonathan bribed ethnic militias with N9bn to scuttle the elections.

Adams, who came under fire for leading thousands of youths to protest against the Chairman of the Independent National Electoral Commission, Prof. Attahiru Jega, in Lagos last Monday, said supporting Jonathan was in the interest of the Yoruba nation.

He said the APC should be commending Jonathan for approving contracts for the OPC because only the Niger-Delta militants were benefitting from the oil money before now.

He said, “The allegation is that the Federal Government gave us a contract: Pipeline security. What is the security of pipeline to the OPC? We have been running this organisation without getting a dime from any government but most of the security agencies saddled with the responsibility of protecting the pipelines have failed; people were dying every day.

“Nigeria was losing more than N3bn everyday to the activities of the vandals and the agitation of that contract started from Dr. Fredrick Fasehun one and a half years ago and you know the bureaucracy of Nigerian ministries. It was a long process and it was just granted and it will empower nothing less than 5,000 youths from my side.