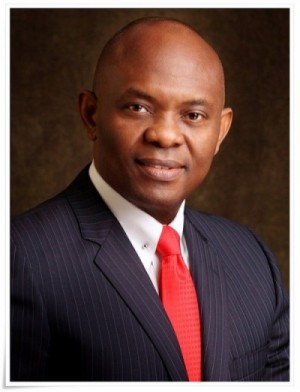 African businessman and philanthropist Tony Elumelu has called on business leaders to make decisions that will increase economic and social wealth, and promote development in the communities and nations in which they operate. Mr. Elumelu, the Chairman of Heirs Holdings and the Founder of the Tony Elumelu Foundation, stated this in a closing keynote speech titled,“Africapitalism as a Catalyst for Development in Africa” delivered at the Oxford Africa Conference, Oxford University on May 22, 2015.

Prof. Peter Tufano, the Dean of Oxford University’s Said Business School, introduced Tony Elumelu to a packed audience at Oxford. Addressing them, Mr. Elumelu discussed what already-established businesses could do to advance Africa’s development through an economic philosophy he calls “Africapitalism” – which focuses on the private sector’s critical role in driving economic and social development across Africa.

“Africapitalism means we cannot leave the business of development up to our governments, donor countries and philanthropic organizations alone,” he said. “We in the African private sector must wake up, recognize and embrace our role in driving the economic growth and the social development of Africa, and we must act on that responsibility in tangible ways.”

Earlier in the week, Tony Elumelu also championed the cause of access to power at the Sustainable Energy For All (SE4ALL) Global Advisory Board ‎meeting in New York. The board is co-chaired by the UN Secretary General Ban Ki-moon and the World Bank President, Jim Yong Kim.

“Good governance is good for Africa,” Tony Elumelu said. “Our continent is open for business. There are lots of opportunities and the return on investment is extremely high.”

Africa’s power deficit is huge and may not be cleared in the next couple of years, Elumelu said. “The power sector is therefore a goldmine for investors.”

Tony Elumelu also represented Africa’s private sector in France, on May 20, during a  global business dialogue on influencing the agenda for the 2015 Conference of the Parties (COP 21), the leading annual negotiating summit on climate issues. Mr Elumelu was invited along with an exclusive group of 40 global business leaders, including Jack Ma, the Executive Chairman of Alibaba Group, Tim Cook, CEO of Apple, and Elon Musk, the CEO of Tesla.

Previous Fear For Buhari’s Govt Mounts Over Low Resources, Crises From Jonathan!
Next DIEZANI BREAKS HER SILENCE AND REVEALS HER SIDE OF THE STORY IN A 3 PART EXCLUSIVE INTERVIEW

The Federal Government had ordered telecommunications companies to deactivate the telephone lines of subscribers who ...