Fashola Rated As “Super Minister” In Buhari’s Govt …. May Vie For Presidency In Future 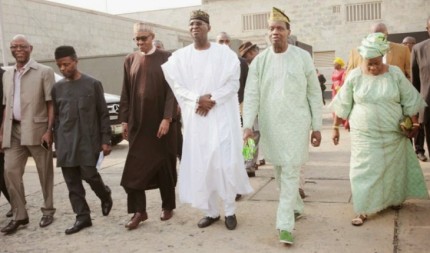 Babatunde Raji Fashola, fondly known in Lagos as BRF, has arisen to the position of Primus inter pares – the first among his equals, after bagging 3 massive and critical portfolios in the new cabinet.

Though he was expected to be a cornerstone in President Buhari’s cabinet, the 3 portfolios assigned to him showed that his clout was greatly underestimated.

The three portfolios assigned to BRF are no child’s play. They are exactly where the mass of Nigerians need to see the most transformation and progress.

His appointment into those 3 positions come at a time when Nigeria and Nigerians:

From Buhari’s actions, it is clear that Fashola is the “Chosen One” and the poster boy for APC’s thematic “Change” mantra.

For Buhari, trust, loyalty and honesty is big factor, and he has seen some of those in Fashola.

Also by this action, Buhari is entrusting Fashola to carry on the mandate of change into the streets of Nigeria; to transform the country in the same way he helped transformed Lagos, the commercial capital.

Lagos state has stood out among all the other states in the Federation. Asides Abuja, it is the state with the most infrastructure, thanks to some of the contributions made by Fashola.

Babatunde Raji Fashola (SAN) was born on June 28, 1963 in Lagos. He obtained his First School Leaving Certificate from the Sunny Fields Primary School, Adelabu Surulere, Lagos, after which he proceeded to Birch Freeman High School, Surulere, Lagos and later Igbobi College, Yaba from where he acquired the West African School Certificate [WASC]. He, thereafter, went to the University of Benin, Benin City and graduated with a Bachelor of Laws [LLB Hons] degree in 1987. He was called to the Nigeria Bar in November 1988 after undertaking the statutory training for Barristers and Solicitors.

In the course of his distinguished legal career at Sofunde, Osakwe, Ogundipe and Belgore; and the law firm of K.O.Tinubu & Company, Babatunde Raji Fashola successfully pleaded many cases at High Courts, various divisions of the Court of Appeal and the Supreme Court. He was elevated to the class of Nigerian Elite Lawyers in August 2004 when he was conferred with the rank of Senior Advocate of Nigeria [SAN], a leadership position of the Nigerian Bar and the nation’s highest legal distinction and honour for lawyers.

In his new position as minister, Fashola will be overseeing a broad gamut of parastatals and agencies, through which he will expend he numerous skills and administrative talent.

The Energy Commission of Nigeria

Fashola will equally be saddled with the responsibility of ensuring that urban development touches the common Nigerian by coming up with policies that will be people friendly and economically viable.

He is expected to ensure that on-going federal road projects nationwide are completed within record time, and new roads and bridges are opened.

He will also ensure that parastatals like FERMA are up on their toes, working and maintaining the roads regularly.