The newly crowned Ooni of Ife, Oba Enitan Ogunwusi was on Monday, November 23, presented with Aare crown after coming out for the first time following the 21-day traditional rites to the throne.

Oba Ogunwusi who emerged the 51st Ooni   appeared in public for the first time in companied of indigenes of the town and members of the Isoro community. 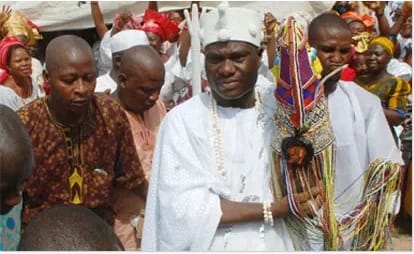 The Ooni was reportedly to have visited strategic places in the town as early as 5.am. He visited his family compound and Obalufe house to perform some rites as demanded by the Ife tradition.

It learnt that gunshots heralded the arrival of the oba and were fired in the air in all places that the monarch visited.

News Agency of Nigeria reported that mats were laid on the road from Enuwa to the traditional gate behind the palace where the Ooni walked barefooted into the gate of the main palace which was reportedly closed since the demise of his predecessor, Okunade Sijuwade.

The inauguration of the monarch which is billed to start in November 30 and climaxed in December 7 when Governor Rauf Aregbesola will present Ooni Ogunwusi with his staff of office.

Meanwhile, there fresh reports over the eligibility of the young Ooni to occupy the throne with the Centre for Human Rights and Social Justice (CHRSJ), raising fresh objections over the character and integrity of the monarch, giving reasons why he is unfit to sit on the stool of his ancestors.