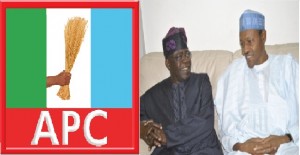 Though Tinubu has denied any comment, about PDP defectors to APC; sources have said he truly hold negative opinions on the issue. Now one of his close political ally, Bisi Akande Former interim Chairman of the All Progressives Congress, has warned the party to beware of defectors from the Peoples Democratic Party in order not to allow them to kill the ruling party.

Akande, who described those defecting from other parties especially those from the PDP as parasites, said if allowed, they would destroy the APC the way they destroyed the PDP.

Speaking with journalists at his residence in Ila Orangun on Saturday on the day he clocked 77 years, Akande said parasites usually kill their hosts and look for new hosts after the initial hosts might have died.

According to him, the influx of new members to the ruling party appears good but the party must watch it so that what killed the PDP will not destroy the APC.

He said, “We in the APC should be careful, the defection is not a strange thing but I know it is always done by parasites. I have always remained in one line of politics. I have never defected and I will never defect; I will remain in that progressive polity.

“But those who are defecting from one party to the other, by nature, they are political parasites. They have killed the original host, which was the PDP, and they are now coming to the APC, which is the new host. It is for the APC to gird its own loins and prevent the parasites from killing the party, because a parasite has no root of its own but feeds on the little food that the host has.

“So, running away from the PDP to the APC looks good but the APC must be careful in dealing with those parasites.”

Akande, who is a former governor of Osun State, said he had remained in the progressives’ camp since he was introduced to the late Chief Obafemi Awolowo. He condemned politics bereft of clear political ideology, saying that was responsible for defections.

Akande blamed the missing budget at the Senate on the indiscipline of its leadership. He said he was not surprised that such a story was coming from the Senate because its leadership was not a disciplined one.

“Only the budget of the Senate was missing, so that leaves a complication into what is happening. You know, it is borne out of the same indiscipline that led to the hijack of the National Assembly. When the foundation of an assembly is indiscipline- until you remove the cause, you will continue to have this kind of problem in your hands.

“That assembly was not constituted the way my party planned it. It was by hijack and indiscipline which constitutes the way it is. So, you can expect any kind of dissatisfactory stories from such an assembly.”

Speaking on the agitation for Biafra, the former governor recommended a dialogue for any part of the country that wanted to break away from the rest of the country.

He said he prayed that what befell the first Biafran secessionists would not befall the new set of Biafrans.

On the arms deal scam, he said, “The major problem of Nigeria is corruption. They used to do cover-up with inflated contracts and so on, but in this one, the fund was taken from the CBN and shared. It is a phenomenon in corruption in Nigeria.

Akande also exonerated Governor Rauf Aregbesola from the financial crisis in the state, saying the state was not viable because of its absolute dependence on the allocation from Abuja to run its affairs.

“As of today, about 26 states cannot pay salaries. So, it is either they close shops and pack up or they negotiate with neighbouring state and merge. They may continue to struggle. And that is what we may continue to have because until you have money, you won’t be able to run the government. Let us not forget tha t it is the constitution that created the basis for all these acrimony and confusion that we have,” he added.