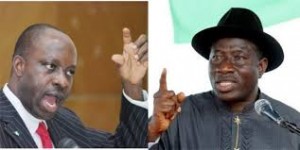 A former Governor of the Central Bank of Nigeria, Prof. Chukwuma Soludo, has accused former President Goodluck Jonathan of turning the CBN into the Presidency’s Automated Teller Machine to produce cash for the government.

He also said the Jonathan administration ran the bank like a movie plot from Uganda under the late dictator, Idi Amin Dada.

Idi Amin ruled Uganda with an iron fist between 1971 and 1979, and has been described as one of the most corrupt African rulers.

In an interview in the current business edition of The Interview, Soludo described the CBN as “the ATM of the Presidency,” under Jonathan.

He said it was regrettable that in spite of the bank’s statutory independence, it continued to be a victim of high wire politics, often “electrocuting” its leadership.

Soludo said, “Recent revelations regarding the ‘arms-gate’ (short for the $2.1bn scandal involving the former National Security Adviser, Sambo Dasuki) and the apparent abuse of the CBN as an ATM by the Presidency should get reasonable people thinking.

“Imagine a scenario where a President can order the CBN to create an intervention fund for national stability and the CBN literally ‘prints’ say, N3tn, and doles it out as cash to the President to prosecute an election campaign, or for just about anything he fancies. It is a scary thought.

“We are going down a dangerous path that ruins the economy. I don’t know any other country where such is tolerated, except perhaps what I watched in a movie about Idi Amin and his governor of the central bank.”

The former CBN governor, according to a statement by the Managing Director/Editor-In-Chief of The Interview, Mr. Azu Ishiekwene, is one of the 10 leading business lights featured in the current edition of the magazine, which provides insights into opportunities and threats in business this year, ranging from manufacturing and power, to banking and investment, small businesses, advertising and jobs.