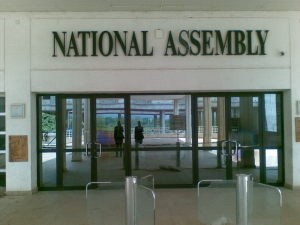 Undercover Security report has revealed the plot of Boko Haram to attack National Assembly. Consequently, President of the Senate, Dr. Abubakar Bukola Saraki, has directed a review of all security arrangements in the National Assembly.

According to the Special Adviser to the President of the Senate on Security, Major General Saleh Maina (rtd.), the review of the security around the Complex is part of the periodic plans to ensure better protection of lives and properties, as well as improve on the existing arrangement.

General Maina said: “In carrying out the directive of the Senate President, the heads of all security agencies present in the Complex and other officials, whose portfolio has to do with Security, have met at different times to devise a common and water-tight plan.

“Following the meetings, it has been decided that henceforth, it is compulsory for all legislators, staff and visitors to the National Assembly to wear identity tag.”

Maina added that there would be periodic meeting with the security of the institution and a general awareness campaign will be held for all those that have businesses within the National Assembly Complex, to update them on the new development.