Olu Falae Humiliated In Church Over Share From Dasuki”s Loot 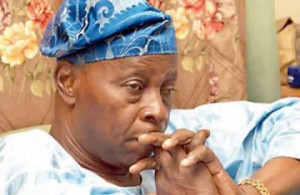 Respected elder stateman,olu falae is is talking,battling every minute,every hour on a daily basis, to explain off between him and Dasuki..One of such attempts was unsuccesful over the weekend..The former presidential candidate of the Alliance for Democracy (AD), collected the sum of N100 million from the former Board of Trustees (BOT) of Peoples Democratic Party (PDP), Chief Tony Anenih. The money allegedly came from the former National Security Adviser, Col. Sambo Dasuki.

Falae, on Sunday during a church service at St. David’s Cathedral, Ijomu street, Akure, Ondo state capital tried to explain to worshippers that he was not involved in the diversion of security funds traced to Dasuki, but was allegedly booed by the congregation.

The Yoruba elder statesman explained that the N100 million that was given to him was not connected to the arms procurement fund. He said the money was meant for logistics for voters’ mobilization following the alliance his party forged with the then ruling PDP.

Chief Falae further explained that he had appeared on several publications to clear his name off the scandal, adding that had also explained to the Bishop of Akure Anglican Diocese, Right Reverend Simeon Borokini, who even went as far as showing papers detailing the transfer made to him by Chief Anenih.

According to him, a copy of the same document had been deposited with the Provost of the Cathedral, Very Revd Osotayo.