Fayose On Visit To Aregbesola-..It’s Because Of Tomorrow,Governorship Is Momentary 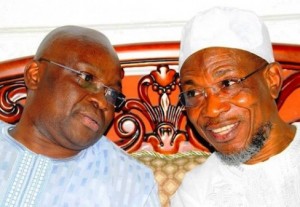 Osun state governor Ogbeni Rauf Aregbesola on Tuesday advised the Governor of  Ekiti, Dr. Ayodele Fayose to face the reality of the death of Peoples Democratic Party (PDP) as a party.

Aregbesola said while he is not asking the governor to abandon the opposition PDP against his wish, he would only advise him to join hands with a political party that will give hope to the people of Nigeria.

He also charged the Ekiti State governor to direct his energy towards bringing human and physical development to western region and Nigeria as a whole.

The Governor stated this when his Ekiti counterpart paid him a courtesy visit at the Government House in Osogbo.

Governor Fayose, during the visit, had said that he is in Osun not for any political reason and that he is not ready to abandon the PDP for the All Progressives Congress (APC) but for his belief in the Yoruba race and her development and unity.

Aregbesola described the visit of Governor Fayose to Osun as demonstration of maturity, saying it takes a very matured human being to know that at the end of every public office, he will be left with humanity.

He said, “Osoko has said that he is not going to leave his party, but the reality today is that PDP has served its term in Nigeria. When a horse is dead, it is either you abandon it or you bury it.

“I want my good friend and brother to know that PDP has exhausted it’s stay in Nigeria, it can no longer be revived, let us look at a political party that will give hope to our people. Opposition must be for a purpose, I stand by you on the unity of Yoruba land and that our leaders not put down in the country.

“The war is over, we are in a season of mobilising our people to agriculture and produce such that we will economically have the strength to give leadership to the Nation and Africa. Our energy must be directed at bringing human and physical development, we have enough in this region to give leadership”. Aregbesola stressed.

He assured Fayose that he will stand by him in his effort to galvanise the people of South-west for accelerated development.

The Governor who lamented the present economic situation of the country noted that there is an invasion on the economy of Nigeria to the extent that the country is loosing 75 percent of her income due to oil glut.

“The country is facing a very serious crises with the rate at which the crude oil price is falling. There is an invasion on the economy to the level that we are loosing 75 percent of our income which is not good.

“At this point, wise people must have an alternative to oil which part of it is your visit. We must use our culture and affinity to form a bond that can make our people live a normal life, it is a duty that we owe our people, States and Nigeria as a whole”.

Speaking earlier, Governor Fayose stated that against all speculations that he was coming to Osogbo to ask Aregbesola help him beg President Muhammadu Buhari, he was  in Osun for the unity of Yoruba race.

He added that the Yoruba race is greater than any political office hence his belief in the development of the race.

The governor averred that the visit of the Ooni of Ife to the 45th coronation of the Alaafin of Oyo is instructive hence the need for every Yoruba sons and daughters to see to the unity and progress of the race.

He said, “This is my first official visit to any APC state in Nigeria. I am not in Osogbo to ask Aregbesola to help me beg as being speculated in some quarters. We are all Yoruba, politics is like water, it can flow anywhere.

“I believe in the Yoruba race, the race comes first before the office of the governor. The race is eternal while that of governor is momentary. We must watch today to be guided by tomorrow. I am here for the unity of Yoruba as it affect the Oodua, the progenitor” Fayose emphasised.