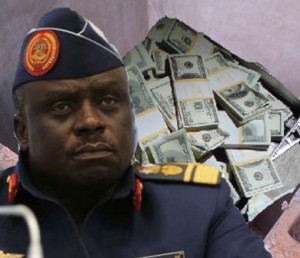 A huge sum of $3 million has allegedly been recovered by the anti-graft agency, the Economic and Financial Crimes Commission, the EFCC, kept in a soak-away pit at Badagry resident of the embattled past Chief of Air Staff (CAS), Air Marshal Adesola Amosu (rtd) ,while another N3 billion also traced to his wife,. Mrs. Lara Amosu was picked up by the EFCC operatives last week in Abuja.

She has been in the custody of the EFCC in Lagos for the past one week. It was learnt that her lawyer has been battling without success to get her released. Mrs. Amosu’s arrest followed the alleged discovery of about N3 billion in her bank accounts. She was allegedly holding the money in trust for her husband.

Other properties traced to the former CAS were also being held by his wife and children.

EFCC discovered N17.5 billion in the accounts of wives of three airforce chiefs. The monies were scattered in various banks accounts.

Amosu was arrested two weeks ago by the EFCC over his involvement in the arms scandal. “Shortly after Amosu was picked up in Abuja, his wife, Lara, was subsequently arrested. Investigations conducted showed that some of the monies the former Chief of Air Staff made through some contracts and procurements in NAF were traced to his wife’s accounts.

“About N3 billion was traced to the wife’s accounts while some assets acquired by the former service chief was in her name and some others in her company’s name. “So, Lara is an accessory to a crime. The proceeds with her are from the arms funds. As we prosecute her husband, she must also be held accountable,”

It was further learnt that the wife of Air Vice Marshal J.B. Adigun, Chief of Account and Budget of NAF, has travelled out of the country two weeks ago, shortly after the arrest of her husband. The hurried trip was said to have become necessary in the face of the arms probe. Adigun has been indicted by the presidential arms panel. He is in the EFCC custody. Several of his properties in Lagos and Abuja have been seized by the antigraft agency. Billions of naira was said to have been traced to Adigun’s wife’s accounts.

According to the source: “In continuation of the investigation into the arms probe, the EFCC operatives took Amosu to his residence in Badagry. After a thorough search of the residence, a fresh small ‘soakaway’ pit was discovered in the compound. The operatives suspected foul play, which informed the breaking of the ‘soakaway’. Surprisingly, $1 million  was discovered. Air Commodore Akinwale (rtd) who manages the St. Solomon Health Care Limited, an ultra-modern diagnostic centre owned by Amosu, along Adeniyi Jones Avenue in Ikeja, Lagos is still in the custody of the EFCC. The retired airforce officer oversees the medical centre on behalf of Amosu.

The diagnostic centre has been sealed off by the anti-graft agency. Meanwhile, the EFCC is still keeping Amosu, Adigun, and Air Commodore O. Gbadebo in Lagos. A source said that the anti-graft agency has been taking the indicted officers to assets traced to them, considered to have been acquired through funds illegally realised from the arms procurement. Some of the identified properties have been sealed off.

Amosu, Adigun and Gbadebo were arrested two weeks ago in Abuja. Impect the trio were flown into Lagos in an airforce aircraft on a Sunday and discreetly kept in a hotel.

The arrest and interrogation of Amosu is coming after the Federal Government had directed the EFCC to prosecute the ex-CAS. Amosu, Adigun, Gbadebo and other indicted officers are being investigated over 10 NAF contracts totalling $930,500,690 awarded to Societe D’ Equipments Internationaux (SEI) Nig Ltd. between January 2014 and February 2015.

The award letters, according to the arms probe panel, contained misleading delivery dates, suggesting fraudulent intent in the award process.

Operatives are also grilling the ex-chief of army staff and the two senior officers over the procurement of two used Mi-24V Helicopters instead of the recommended Mi- 35M series at the cost of $136,944,000. The helicopters were discovered to be excessively priced and not operationally airworthy at the time of delivery.

The arms probe panel established that a brand new unit of Mi-24V Helicopter goes for about $30 million. The helicopters were delivered without rotor blades and upgrade accessories.

The three of them are also being grilled over the procurement of four used Alpha-Jets for the NAF at the cost of $7,180,000. Whereas NAF paid for four used Alpha-Jets, the panel confirmed that only two of the Alpha-Jet aircraft were ferried to Nigeria after cannibalisation of engines from the NAF fleet.

They are also being investigated in the procurement of 36D6 Low Level Air Defence Radar for NAF, which was awarded to GAT Techno Dynamics Ltd in April 2014 at the cost of $33 million under his watch.

The arms panel averred that the radars were excessively priced as a complete set of such radars goes for $6 million.