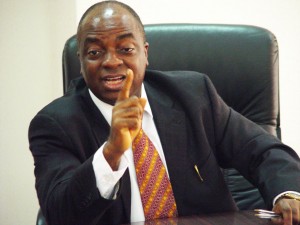 The presiding bishop and founder of Living Faith Church World Wide, popularly known as Winners’ Chapel, David Oyedpo is in the spotlight again for deccribing the Supreme Court’s validation of the election of the governor of Akwa Ibom state, Udom Emmanuel, as a the triumph of “light over darkness.

When delivering his speech on behalf of PDP governors, Fayose as usual, who has earned a reputation for attacking the present administration made a fiery accusation that the APC  stole the mandate of the PDP through deceit and propaganda.

Fayose also reiterated an earlier statement by Bishop David Oyedpo, describing the victory of Udom at the apex court as a victory of light over darkness.

Bishop Oyedepo had earlier in the program delivered a sermon themed: Who am I, O Lord God, in which he described the Supreme Court’s validation of the election of Governor Udom Emmanuel of Akwa Ibom state as the triumph of “light over darkness.”

In his words: “We are celebrating the victory of light over darkness. What we are celebrating here is the supreme hand of God in the affairs of men. And I also want to say it is important to know why we need to do this. Thanksgiving is a debt we owe for every act of God we experience.

“I want to acknowledge the privilege to be here to share the word of God and also acknowledge at the same time all our governors, past and present, who are here and all top government functionaries who are in this service.

Although the bishop did not elaborate on what he meant by “We are celebrating the victory of light over darkness. What we are celebrating here is the supreme hand of God in the affairs of men”, but his statement connotes that the PDP administration is the light and the APC administration, the darkness and that God played an active role in Governor Emmanuel Udom’s Supreme Court victory.

It will be recalled that Bishop Oyedepo once allowed Goodluck Jonathan to use his church to campaign for votes.

This was what he did in the weeks building up to the 2015 general elections when he allowed Goodluck Jonathan to use his church as an avenue to campaign for votes.

As one of the die-hard supporters of the former president, Oyedepo prayed and prophesied for the success of Jonathan’s re-election bid. It was then reported that the prominent cleric even sparked controversy by threatening to open the gate of hell on those opposing the former president.

It is on record that David Oyedepo was among Christian religious leaders who endorsed Jonathan as their preferred candidate for the 2015 presidential election, in the name of God, at a meeting at the Redemption Camp of the Redeemed Christian Church of God (RCCG) last year.

Previous Germany President Present As Dangote Signs MOU
Next Kumuyi: Deeper Life Doctrines; Women Ministry Not In The Bible, I’ll Abolish Them Before I Die