Analyists,Customers Berate Man For Going Naked In GTbank Over N150,000 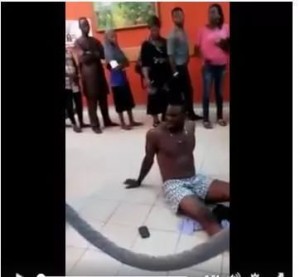 Recently, an aggrieved bank customer decided to strip down to his boxers in the banking hall of Guaranty Trust Bank (GTbank)..and loyal customers of the bank and financial analyists have condemed the act as uncivil,babaric and and uncouth ..’he could have been careless with his ATM,.he should wait for the thorough investigation which GTbank is known for’

. The man almost naked on the floor of the bank From the 6-minute video posted on Facebook by one Omowunmi Micheal, the young man claimed a sum of N150,000 vanished from his account and all his efforts to get it back proved abortive.

After a month and few days, he resorted into pulling off his clothes in the banking hall so his money can be given back to him. Share on Facebook Share on Twitter All efforts by the security men and other bank customers to get him together proved abortive as he continued ranting loudly in Yoruba language in the banking hall….saying before he can leave the place, his money must be given to him.