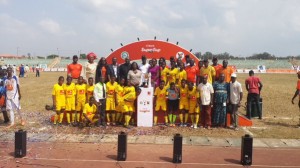 After two weeks of exciting polo, music, fashion, champagnes and cocktails, the 2016 NPA Lagos International Polo Tournament finally came to a grand close on February 21, 2016 at the Lagos Polo Club, Ikoyi, Lagos.
From thrilling performances by players and music stars to the dazzling GTBank Lounge, where guests were treated to epicurean cuisine and vintage wine, the 2016 NPA Lagos International Polo Tournament lived up to its billing as the best tournament ever.
Elite, stylish and extravagant are few words that describe this year’s event as the social scene at the annual Lagos polo tournament was as much of a show as the game on the pitch.
Following a two-year hiatus, the organisers set out to host an event second to none and unparallelled on every front.
The game attracted everyone from big name politicians to aristocrats, traditional leaders, sport lovers and the full panoply of professional players from Argentina, Syria and South Africa.
An exciting first stage of the high-class tournament came to a close on Valentine’s Day with Lagos Shoreline emerging the biggest winner by clinching the Open Cup at the expense of Lagos Caverton, while Lagos dominance of the first stage was highlighted once again by Sao Polo’s win of the Dansa Cup against STL in an all-Lagos final.
Lagos Shoreline defeated Lagos Caverton 9-8 to emerge champions of the Open Cup, while Lagos Sao Polo beat STL 5-4 1/2 to win the Dansa Cup.
The Kola Karim-led Shoreline also added the Oba of Lagos Cup, which they won by beating Lagos Ashbert.
The second stage of the tournament kicked-off on February 16th with three matches in the Low Cup.
However, the highlight of this stage was the prestigious Majekodunmi Cup, which is the most-lucrative trophy in Nigerian sports.
It is worth N25 million for the winners.
Fifth Chukker Polo emerged winners of the prestigious Majekodunmi Cup having defeated Ironclad/Trojan in the final.
In the Low Cup final, Aerovote defeated Lagos Zippy, while the last match of the day saw Kano Titans beat Kano Keffi Ponys in the Majekodunmi Subsidiary final to clinch the Governor’s Cup.
Commenting on the GTBank sponsored NPA 2016 Lagos Polo tournament, Segun Agbaje, the Managing Director of Guaranty Trust Bank Plc, stated: “We are proud to partner one of Nigeria’s oldest and most reputable Polo Clubs in delivering an event that is second to none on the Country’s social and sporting calendar, and one that provides a platform for us to connect with our customer segment that play and enjoy the “Sport of Kings.”
Agbaje further stated that from its profound origins rooted in noble values to the naturally evolving symbiosis between player and horse, Polo reflects pure passion, quality, competitiveness and fair play.
Guaranty Trust Bank Plc is one of the few Nigerian financial institutions that have maintained a defined Corporate Social Responsibility strategy, most especially in sports and education.
The GTBank Masters Cup as well as the Principals Cup tournaments in Lagos and Ogun States are some of the projects the bank has taken up in this regard.