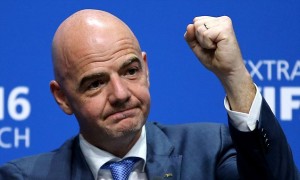 The new president will serve the remaining term of office for which Blatter was elected, which means the election will take place in 2019.

“Dear friends, I cannot express my feelings in this moment. I told you I went through a journey, an exceptional journey, a journey which made me meet a lot of fantastic people, who love football and breath football and live football every day,” Infantino told the congress.

“We will restore the image of FIFA and the respect of FIFA and everyone in the world will applaud us.

“I want to work with all of you together in order to restore and rebuild a new era of FIFA where we can put again football at the centre of the stage.

“FIFA has gone through sad times, moments of crisis, but those times are over. We need to implement the reform and implement good governance and transparency. We also need to have respect.

“We’re going to win back this respect through hard work, commitment and we’re going to make sure we can finally focus on this wonderful game that is football.”

Although the first round of voting failed to determine an outright winner, Infantino emerged as the leading candidate with 88 votes, three more than Sheikh Salman.

Following Infantino’s election, the man he succeeds released a statement congratulating him on his appointment.

“I congratulate Gianni Infantino sincerely and warmly on his election as the new president,” Blatter said.

“With his experience, expertise, strategic and diplomatic skills he has all the qualities to continue my work and to stabilize Fifa again.”

FIFA have announced Gianni Infantino as the successor to Sepp Blatter, as the new president of world football’s governing body.

Following a second round of voting, needing 104 votes to win, Infantino polled 115 and was named FIFA president until 2019 – the second successive Swiss president.

Infantino was born in Brig, Switzerland but has Italian origins.

He did not have a footballing background as a youngster and continued his education to the University of Friborg (Switzerland), where he studied law.

Before joining FIFA, he was working as the general secretary of the International Centre for Sports Studies (CIES) at the University of Neuchatel and had worked as an advisor to football bodies in Italy, Spain and Switzerland.

Infantino has held the position of general secretary at UEFA, the European games’ governing body, since October 2009 after initially joining as a lawyer in 2000.

His role has seen him help strengthen the national and international game across Europe, as well as try to increase the credibility and respect of UEFA throughout the rest of the world.

He is at the helm of UEFA’s administration and has tried to create a sustainable future for the game, including the introduction of Financial Fair Play, which he championed.

Infantino has also increased the participation numbers in Euro 2016 from 16 to 24 teams and spearheaded the campaign to have Euro 2020 hosted across 13 countries.

Infantino was considered the second favourite for FIFA presidency before voting took place.

But he was always confident that he would come out on top after UEFA’s executive committee confirmed their unanimous support for the Swiss-Italian. He also secured the support of Central America.

“I am very honoured for the support I received. I am also much more responsible now than I was before these meetings,” he said after gaining the support of Europe’s nations.

“With such a big endorsement you have to take these proceedings very professionally, very openly. I am very confident from what I hear and what I’ve heard from the 54 members.”

To the average football fan, the most significant change that is likely under Infantino’s presidency is that the FIFA World Cup would become a 40-team tournament, as opposed to the traditional 32.