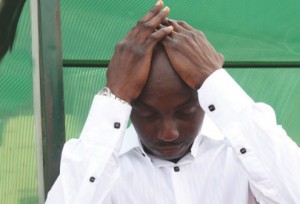 After Sunday Oliseh resigned from the Super Eagles as head coach in the early hours of Friday morning, the Nigeria Football Federation (NFF) has resolved to look beyond indigenous coaches in subsequent hiring of a substantive manager for the three-time African champions.Fielding questions at the colloquium organised as part of the 18th Annual Africa Business Conference of the Harvard Business School, Boston, Massachusetts, United States, President of the NFF, Amaju Melvin Pinnick, said at the weekend that the federation had reached the “last bus stop” in keeping faith with local coaches
Two ex-internationals, Stephen Keshi, and until last Friday, Sunday Oliseh, were in charge of the senior national team. While Keshi won an African Cup of Nations in his first stint at South Africa 2013, he failed to qualify Nigeria to defend the same trophy two years after.
Oliseh on the other hand was in charge of the senior national team for seven months during which he played 14 games and lost two. One of the losses was against Guinea which led to the elimination of Nigeria at the group stage of CHAN 2016 in Rwanda.
According to hotsports.tv, the federation has decided to search for a quality European coach to take charge of the senior national team.
Another ex-international whom Keshi took over from in 2011, Samson Siasia, is the current caretaker manager for Nigeria’s make or mar AFCON 2017 clash with Egypt next month.
“After this Sunday Oliseh debacle, we have definitely turned the corner. We are now going to start shopping for a well grounded and qualified foreign coach to tinker the team. Enough is enough,” declared Pinnick at the Harvard colloquium.
The NFF supremo insisted that there was a world of difference between a good coach and a good manager.
“What we have learnt is that there is a world of difference between being a good coach and being a good manager,” he said with ample emphasis as he fielded questions from a captivated audience who had been enthralled by Pinnick’s contribution as the lead panelist at the colloquium.
Although there have been speculations that the NFF leadership was looking in the direction of French man Harve Renard, a development that was partly responsible for Oliseh dumping Eagles, checks revealed that Nigeria is gunning to hire a top European manager.
coach oloiseh slideshow sports 2016-02-29
Younews Ng
Share