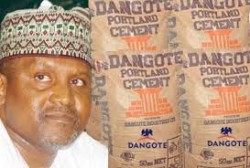 Dangote Cement Plc has declared a Profit After Tax of N181.3 billion for the financial year ended Dec. 31, 2015.

This is contained in the company’s audited result released by the Nigerian Stock Exchange (NSE) on Tuesday in Lagos.

The News Agency of Nigeria (NAN) reports that this was against the N151.5 billion posted in 2014.

The profit represented a growth of 13.67 per cent when compared with the figure for 2

The company’s Profit Before Tax stood at N188.3 billion compared with N184.7 billion achieved in the corresponding period of 2014.

Further breakdown of the result indicated that the company declared a revenue of N491.7 billion compared with N391.6 billion recorded in 2014, representing an increase of 26 per

NAN reports that based on the performance, the company’s Board of Directors recommended a dividend of N8 per share against N6 paid in 2014, a growth of 33 per cent.

The company in 2015 announced plans to increase its capacity by 25 million tonnes across African countries in Ethiopia, Kenya and Zambia with a new plant in Nepal.