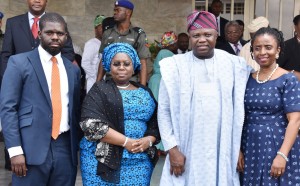 The Governor Ambode has described the ETF as an instrument designed to galvanise the creative and innovative energies of all Lagosians, adding that the Fund would only be available to Lagosians and residents of the state.

He said members of the ETF board were carefully selected based on their track records of professional integrity and selflessness, and therefore charged them to make transparency and accountability their watchwords.

The Governor said: “I urge all Lagosians especially our young entrepreneurs and artisans to embrace this opportunity. The process of accessing the fund must be transparent, and beneficiaries will be chosen only on the strength and quality of their applications. The management of this Fund will be guided by global best practices and strict adherence to the rules and procedures spelt out in the law.

“Fellow Lagosians, this initiative has been designed to succeed. Our government will commit N6.25billion every year within the Four years of this administration to a total of N25billion.

“Realizing that the first year of this administration is just 3 months away, precisely on May 29, 2016, the Commissioner for Finance is hereby directed to transfer the sum of N6.25b to the Employment Trust Fund immediately, today.”

Besides, Governor Ambode said the effectiveness of the initiative would not be measured by the number of beneficiaries but by the number of successful businesses created, the number of employment opportunities offered and the overall multiplier effects on the State economy within a reasonable period of time.

The Governor, who noted that Lagos deserved nothing short of such initiative as the ETF, charged the Chairman and members of the board to hit the ground running and ensure that Lagosians feel their presence immediately.

“Every Senatorial Zone of the State must feel the positive impact of the Fund. The Board must ensure that the distribution of the fund is evenly spread across the State,” he said.

He also urged individuals, corporate organisations and multi-lateral agencies to join his administration in turning around the fortunes of the youths and thereby energise the State, saying such would boost the economy of the nation as a whole.

Governor Ambode, who also inaugurated the Chairman and members of the State Civil Service Commission, urged them to discharge their duties with diligence and integrity.

He said the civil service is at the centre of what government does and, in Lagos State, the desire of his administration is to ensure that public service exudes the highest grade of professionalism and selflessness in all ramifications.

He, however, expressed confidence in the ability of the members of the Commission to perform.

On the other hand, the State Civil Service Commission is chaired by Mrs. Taiwo Adeyinka Oyemade, while the members are Mr. Satar Arilesere, Mr. Wasiu Odeyemi, Engr. Oladimeji Oshinowo and Pastor Israel Alagbe.

Responding, Omoigui-Okauru thanked Governor Ambode for the opportunity to serve the people, and assured that she would work hard with members of the board not only to fulfill the Governor’s campaign promises, but would bring hope to the teeming youths of the state.
Omoigui-Okauru, who is the former Chairman of the Federal Inland Revenue Service (FIRS), also assured that the board would ensure full compliance with the provisions of the law setting up the ETF.

Previous Another 14yr Old Girl Abducted,Sighted In Sultan of Sokoto Palace
Next Ese Opens Up On Her Travails With Yinusa