Ese Opens Up On Her Travails With Yinusa 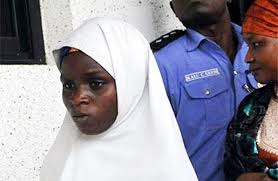 Ese Oruru ,the abducted girl has reveal details in an interview,,she said…;1. Asked how and why she followed Yinusa Inuwa to Kano, she said: “I just followed him. I don’t know how I followed him.”
2. On people’s belief that she deliberately absconded with the man, Miss Oruru retorted: “I know that we used to play with all of them, our customers that come to buy food from our shop. There is nobody that is different. I sell food to all of them and I laugh with all of them.”
3. On how she got to Kano and started living there, Ese said: “We traveled to Kura the next day with one man like that. He is the chief of the town. When we got there, they took me to one place and there they gave me hijab; they put it on me. And after that, they took me to one house in Kura. And from there on Monday, in the morning, we went back to the Emir’s Palace in Kano; then in the afternoon, we traveled back to Kura, to stay in the house.”
4. She also explained what happened at the Emir’s palace, saying: “At the Emir’s Palace, they were asking him questions. They did not talk to me. They did not ask me anything, but they were asking him. Then they were speaking in Hausa language and I did not understand the language very well that time; so I didn’t understand what they were saying.”
5. On the purported wedding ceremony between her and her said lover, Ese noted vehemently that, “No, I did not get married to anybody.”
6. Ese also explained her conversion story thus: “They took me to one place. Before they took me from the house to Kura, they put me in hijab, then we went to Kura. When we got there, they went to one place, and one old man came there and he would say something and they would say I should repeat. Then I would repeat. If the man said something again, they would say I should repeat and I would repeat just like that.”
7. While adding credence to claims she may have been hypnotised, the teenager said: “Medicine? I don’t know. But if they put it in water or food… They used to give me something, but I don’t know if it is water they used to prepare it. But if I am not well, they would buy medicine for me and I would take. But it was not those types of native medicine. It was from the pharmacy.”
8. So, what will she tell Yinusa if she sees him? She broke down in tears saying: “I tell you I’m confused. I don’t know what to do.”
9. Ese is now very fluent in Hausa, but how did she learn it? Was she taught specially? She says: “No. It is because the people there speak only Hausa. They don’t understand English. And when they spoke, I didn’t understand; so I tried and struggled so I could understand what they were saying and communicate with them. That was how I learnt the language.”
10. Parting shot for young girls of her age bracket: “They should be careful. They should be careful with the people they play with or talk with, because it’s not everybody that is good.”
abduction Crime ese slideshow yinusa 2016-03-03
Younews Ng
Share