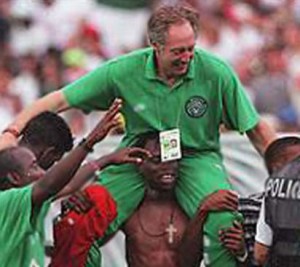 Bonfrere Jo, known for leading Nigeria to the Atlanta’96 Olympics gold medal as well as the 2000 African Nations Cup final has stated he knows how to revive the fortunes of the Super Eagles if he’s handed the coaching role on a permanent basis. Sunday Oliseh shockingly resigned from his position as head coach two weeks ago and Samson Siasia alongside a team of ex-internationals has been put in temporary charge of the Super Eagles.
But Bonfrere, brought to the country by Dutchman Clemens Westerhof says most coaches that have coached Nigeria don’t know how to handle the job hence their failure rate, saying only Stephen Keshi could handle the pressure of the Super Eagles job.

I know Nigeria very well; I worked there for a long time to understand the players’ and the officials’ thought processes. I understand that Nigerian players like to play football and that was why I worked very well with the players. If you don’t understand the players, their mentality, then it will be very difficult for any coach to work with them and get the best from them.” He said to CompleteSportsNigeria.

”Your local coaches don’t always succeed because you have too many people who put pressure on them and again  international football is beyond the local coach.”
I’m interested of course (in the job), because I enjoyed working in Nigeria. it’s because you have a whole lot of good players with technique, who love to work very hard and always want to play. The most important thing, as a foreign coach, I have to teach the players how to play good football. Certainly, I’m interested (in coming back to Nigeria as Super Eagles coach). Of course, I would like to go with Nigeria to the African Cup of Nations; I would like to go with the Super Eagles to the World Cup in Russia 2018.
Before you work at that level (of being a coach) and succeed you must first of all have the experience. Oliseh did not have that, so it was going to be very difficult.
”It is the duty of the coach to build a strong squad, identify those he needs to get the job done and bring them along. In this case, the players and his backroom staff or his assistants. What he thinks will give him result is what he would like to do. The important thing is the success of the team and Nigeria and not only that of the coach.”

”Nigeria have won the Nations Cup three times, one by Keshi. Who won the other two, Nigerian coaches or foreign? My position is foreign coaches are better in position to win than local coaches.”
bonfrere jo slideshow sport 2016-03-07
Younews Ng
Share