Journalists Have Nothing To Fear From FG – Minister 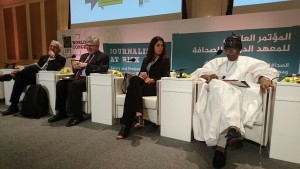 The Minister of Information and Culture, Alhaji Lai Mohammed, has said journalists in Nigeria have nothing to fear from the Nigerian government in the performance of their duties.

”Under this dispensation, we have never even contemplated stifling the freedom of the media not to talk of hounding them to death,” the Minister said in Doha on Sunday when he featured as a panelist at the ongoing 2016 Annual Congress of the International Press Institute (IPI) in the Qatari capital.

”Not a single journalist is in detention in Nigeria today. The government of the day is not a threat to the media, and it is not about to stifle press freedom or deny anyone his or her constitutionally guaranteed rights,” he said at the session, devoted to a debate on the implementation of the document on the ”International Declaration On The Protection of Journalists”’, which was presented at the Congress.

”These (measures) include strengthening the rapport between the government and the media, which I have done by meeting with the major stakeholders in the media industry, and setting up a committee between the media and the security/intelligence agencies to deepen communication and understanding,” he said.

The Minister also said while the government has ensured the protection of the premises of vulnerable media establishments when required to do so, that does not affect the independence of such organisaions.

Commenting on the role of governments which regularly target journalists for their work, he said ”the state which ought to protect life should not be the one to snuff it out.”

Alhaji Mohammed stressed the need for capacity building for media practitioners as a way of enhancing the performance of their duties, saying the local chapters of the IPI and other media organizations have a role to play in this regard.