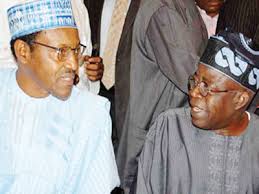 President Buhari is strategizing to douse the tension against him within & outside APC…. and he knows Tinubu is man for the job.

We reliably learnt on Friday that before the President’s recent moves, the relationship between the duo had not been rosy.

Findings showed that Buhari decided to reach out to Tinubu to seek his support for the control of the APC.

It was gathered that Tinubu was not happy with the appointments the President had been making since his inauguration on May 29 last year.

A member of the APC National Working Committee, who confided in Us, said that Tinubu had been loyal to Buhari.

According to him, Tinubu was fighting Buhari’s battle when he decided to support Senator Ahmed Lawan and move against Senator Bukola Saraki for the senate presidency.

The national officer stated that Buhari was aware of the fact that Tinubu had been loyal to him since he (Buhari) joined the presidential race.

He said, “You will recall that Tinubu was initially supporting George Akume for the senate president position, but he switched over to Lawan when it became obvious that that was the man the President preferred. Also, many APC members are aware that Tinubu lost out in ministerial and many of the appointments made by the President.”

Another prominent member of the party told Us that Tinubu had been maintaining what he described as a “siddon look” attitude towards the President before now.

He said prominent  members of the party were worried that the president failed to consider the APC leader’s candidates for appointments.

A Presidency source, who confirmed the recent moves by Buhari, said that the President was not unaware of what the APC national leader did for him.

The source stated that Buhari’s reaching out to Tinubu was borne out of the alleged subtle moves by some elements in the party, including a former Kano State Governor, Dr.  Rabiu Kwankwaso, to reposition themselves for the 2019 presidential race.

The former Kano State governor was alleged to have launched his 2019 presidential ambition during his visit to Kano early this month.

The Kano State chapter of the APC had, at a press conference in Kano, said that it was probing the former governor’s “misconduct,” adding that there was no presidential vacancy in the party.

But Kwankwaso, in a statement signed by his Chief of Staff, Yunusa Dangwani, said the former governor did not launch any presidential campaign.

Explaining the governor’s visit to Kano, the aide said, “It is appalling and rather unfortunate that the good gesture of Senator Kwankwaso has been mischievously interpreted wrongly.”

Although former Vice-President Atiku Abubakar has been a loyal APC man, our correspondents gathered that chieftains of the party were aware that he was not uninterested in the presidency.

In an interview in 2015, when asked if he would contest for the presidency again, he said that it was too early to answer such a question.

He had said, “It is quite too early for such a question. We are in a transition process. We have not even formed the next government. You are asking me whether I will like to run again or not. I think it is just too early.”

It was gathered that Buhari was aware of the moves by some elements in the party to position themselves for the 2019 presidential race.

That, investigations showed, informed the decision of the party caucus at its meeting on Tuesday to declare that there was no presidential vacancy.

According to a report on Thursday, the APC national caucus, comprising serving and former governors, the National Assembly leadership, and selected members of the national executive of the party, at the meeting said the endorsement of Buhari for a second term would help to stabilise the polity in the face of what members described as the 16-year rot inherited from the Peoples Democratic Party.

Another top member of the APC, who confided in Us, said, “Buhari needs the support of Tinubu to survive the onslaught of elements that want to seize the control of the party ahead of the 2019 elections.”

The party chieftain stated that in boards and other appointments that would be made by the President in the months ahead, Tinubu’s loyalists would be taken care of as a way of wooing the APC leader.

He said, “Although the President is not somebody who can be dictated to, he is not an ungrateful person. He is aware of the role played by Tinubu in his election and he will not abandon the man.”

When contacted, the Special Assistant to the President on Media, Mallam Garba Shehu, declined comments.

Repeated calls to the Director-General of the Atiku Media Office, Mazi Paul Ibe, indicated that his phone “was either switched off or out of coverage area.”

Also efforts to get the spokesman for Tinubu, Mr. Sunday Dare, did not succeed as calls to his mobile telephone did not go through. He had not responded to an SMS sent to him as of the time of sending this report.

But a prominent member of the party, who spoke on condition of anonymity, said it would be good if Buhari could reach out Tinubu in view of the contributions of the party leader towards Buhari’s victory at the poll.

Also, Dr. Junaid Mohammed, who was the Joint House Leader of the defunct Peoples Redemption Party, in the House of Representatives during the Second Republic, advised the APC to learn from history.

The former lawmaker said President Muhammadu Buhari and the leadership of the APC must find a way of working together in spite of whatever individual differences they might have.

He said, “I would advise that President Buhari sits with the leadership of his party for them to do some soul searching.

“They must realise that they need each other to deliver on the promises made to Nigerians; they must be seen to be on the same page on issues of policy and what have you.

“Those handling the President must be able to tell him some home truths about how democracy works-you need people.”

Speaking in a similar vein, a public affairs commentator and member of the civil society, Auwal Musa-Rafsanjani, said it would be a disaster if the APC begins to behave like the Peoples Democratic Party.

He said, “We strongly advise the APC to sit down and resolve their issues and avoid distractions.

“Whether true or not, there are rumours of a frosty relationship between and among leaders of the party. The sooner action is taken to ensure that these rumours don’t turn out to be true, the better. If on the other hand they are true, it is better that whatever the issues are; they are quickly resolved in the interest of the party and the nation.

“Nigerians have invested so much hope in the APC to be let down on account of unresolved internal wrangling. It is time for the party to sort itself out and move the nation forward.”

The National Publicity Secretary, Afenifere, Yinka Odumakin, said, “Most of the legacy parties in APC never knew the basics of internal democracy and the party itself was formed as a special vehicle to grab power.

“Now that they are in power, they must learn how to democratise internally as they cannot give the country what they don’t have.

“It is frightening that they have allegedly scrapped their BOT because they can’t agree on who to chair it. The implication of that for the polity is that if any democratic situation in the polity would not serve their interest, they would look for an undemocratic means to scuttle it. Indeed the embarrassing political situations we have seen in Kogi, Bayelsa and Rivers partly flow from this undemocratic mood.

“The APC must learn to subject its internal activities to democratic processes so as to be able to affect the polity positively.”