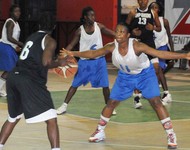 First Bank Basketball Club will take on Benue Princess today at 3pm in their opening game of second phase of Zenith Bank Women Basketball League, which began in Asaba yesterday.

First Bank’s coach, Peter Ahmedu said that game would afford his team the opportunity to showcase what they have learnt when the league went on recess after the first phase in Abuja. He stated that they would take the games one after the other.

“Of course, we observed that the players made some mistakes in the first phase, but since we got to Asaba, we have worked on the players ad hopefully, we will be in the right frame of mind to perform at optimum level.

“Though we won all our games in the first round, there is always room for improvement and that we hope to achieve that when we start the second round game today. It is always difficult to be at top level throughout the season, but we hope to be at our outmost best during the finals in Lagos.

“I must confess that the atmosphere is not conducive. The upright is not made of fibre, the playing surface is too strong, while the hall is hot because the roof is made of zinc. I am happy we got to Asaba early and we have acclimatised.

Meanwhile, Dolphins’ coach Ochuko Okworogun said her team arrived in Asaba on Friday and her players were not able to train on Saturday because the floor of the hall was being worked on. She, however, assured that her players were ready to continue their winning streak in Asaba.

“We won all our games in Abuja, but some teams gave us a scare, but we have also corrected all the lapses noticed and we hope to do better in Asaba. Like I said in Abuja, some of the smaller teams have really improved, but we are up to the task.