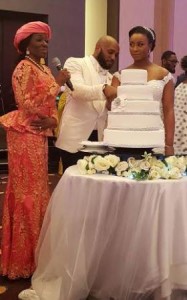 Atiku Abubakar was conspicously absent when his son, Aminu got married to his Ghanaian bride, Nana Akyaa, in Accra, Ghana on Saturday. It was a classy wedding indeed.

Their heartfelt dreams had finally come true; they were bound by swathes of bliss, two simple vows and a grand matchless love – which makes them one of the happiest and power couples right now. And so they kissed and begun a lively, tender life. It was the kind of life that blossomed like a truth universally acknowledged and treasured by only the pure at heart.

News of the couples’ engagement and eventual wedding ceremony predictably kindled the fascination of Nigeria and Ghana high societies. Therefore, on the day of the wedding ceremony, friends, families, business associates as well as other preeminent members of both countries’ glamour pack stormed Accra, Ghana’s social capital thus triggering the mysterious alchemy that turns spectators into participants in their own history.

Unfortunately, Atiku was absent at the high-octane wedding. He was in London delivering a lecture at the London School of Economics. The groom’s mother, Titi Atiku and some family members were in attendance.

Interestingly, there are no bastards in the house of Abubakar Atiku but it is easier for the former Vice President and All Progressives Congress (APC) bigwig to have children than for his 30 children or thereabouts to have a real father.

Lest you misinterpret this; there is nothing wrong with Atiku’s picture as a father, if you would ignore the fact that his children have to write him to book an appointment with him, every time they wish to see him or bond with him.
But the Turaki Adamawa loves his children no doubt as the APC big gun spares no expense in giving them the best that his immense wealth can afford.

If he was not such a busy man, Atiku would have time for his kids and they wouldn’t have to write to book an appointment or queue up to see him. Such are the travails of some silver spoon kids. The good thing about Atiku’s children is the fact that they well-trained and well-behaved children. Unlike some silver-spoon kids, they protect their father’s image and good name.

Previous Civil War Bullet Wound Is A Reason For My Sickness -IBB
Next Jonathan Replies Critics..,Says My Presidency Produced The Richest African