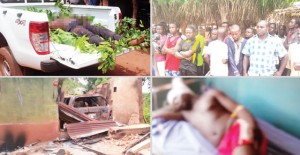 Facts have emerged to show that the wanton killings at Enugu,by Fulani herdsmen was very preventable..but the security forces did not act on information..The people of Ukpabi Nimbo, a community in the Uzo-Uwani area of Enugu State, said it was all preventable.

The villagers, who said this when the Enugu State Governor, Ifeanyi Ugwuanyi, visited the community on Tuesday, stated that they were abandoned even after they alerted security agencies to the plan to attack them.

The General Officer Commanding, 82 Division, Enugu, Major General Attahiru Ibrahim, and the Commissioner of Police, Enugu State, Nwodibo Ekechukwu, were also in the village on Tuesday.

Security was beefed up in the community during the visit, with heavily armed military and police personnel positioned at strategic locations.

A community leader, Dr. George Ajogu, who spoke on behalf of the people of Ukpabi Nimbo at the village square, said the villagers were not taken unawares by the attack.

A corpse of one of the victims of the herdsmen’s attack, which was uncovered in the bush on Tuesday morning, was displayed in a police Toyota Hilux van at the event.

The corpse was said to be that of a secondary school teacher, who was reportedly abducted from his home and killed in the bush by the herdsmen.

Our correspondent observed deep machete cuts on the corpse.

Ajogu added that more corpses were being uncovered in the bush after more than 20 dead bodies were recovered on Monday.

He noted that the attack would have been prevented had the security agencies acted on information made available to them by the villagers.

In an emotion-laden voice, Ajogu stated, “Had it been that security agencies responded appropriately, this would not have happened.

“They (Fulani herdsmen) did not take us unawares, we knew they were coming.

“We are not happy; we have been crying for more than two weeks that our community is under threat. Now, over 20 people are dead.

“We are still discovering corpses; we discovered one corpse this morning and so many corpses are still in the bush.

“We have been shouting and crying but the security agencies did not come to our aid; only one police patrol van comes to this community.

“Because we lack security, the Fulani come here and tell us the land is theirs. They tell the farmers to kneel down and they rape the women in front of their husbands.”

Ajogu noted that due to the location of the village on the border between Enugu and Kogi states, residents of Ukpani Nimbo community were always under attacks from herdsmen, whom he stated sought to turn the villagers’ farmlands into grazing fields for their cattle.

Urging the federal and state governments to come to the assistance of the community, the spokesman said security should be beefed up in the village to forestall future attacks.

He also urged the security agents, who were deployed in the village to restore normalcy after Monday’s attacks, to remain in the community.

“Please don’t leave, if you leave now, they will return to attack us again.

“They (herdsmen) have been killing and raping our people for some time now,” the community leader added.

The Caretaker Chairman, Uzo-Uwani Local Government Area, Mr. Cornel Onwubuya, said he personally alerted the governor, the commissioner of police and heads of other security agencies after he received a confirmation from some Fulani leaders in the area that the herdsmen were going to attack the community.

According to Onwubuya, the said security council meeting lasted till the early hours of Monday, shortly before the herdsmen struck.

He added, “We had a security report that this was going to happen and I convened a meeting with Fulani stakeholders in Enugu State.

“Some Fulani leaders told us that the herdsmen were camped very close to our community. I informed the Commissioner of Police, Enugu State, who assured us that the attack would be stopped.

“The information we got was credible but unfortunately, they still attacked us.”

On his part, Ugwuanyi, who said heads of the various security agencies in the state assured him that the attack would be failed, described the incident as a sad moment for Enugu State.

Ugwuanyi noted that even as the governor, he was not in control of the security agencies.

He said, “At the emergency security council meeting, which I convened, we were given all the assurances that the attack would not happen.”

He also disclosed that information available to the government revealed that the attack was initiated from Kogi State.

Two lorry loads of herdsmen landed in parts of Kogi State before the attack, he added.

The governor urged the Federal Government to address the menace posed by the herdsmen.

“The Federal Government should do the needful, but as the governor, I call for peace and prayers.

“Until the Federal Government decides to address this situation, this will continue to happen,” he said.

The governor also disclosed that his administration had to restrain restive youths, who wanted to carry out reprisal on northerners in the state.

Ugwuanyi announced a donation of N5m to the community, adding that the government would foot the medical bills of the injured.

He urged the people to embark on two days of fast and prayers, assuring that necessary measures would be taken to beef up security in the area and other parts of the state.

The governor visited the injured in various hospitals where they were receiving treatment.

Eze sustained severe cuts on his ankles and other parts of his body.

Another victim, Mr. Kingsley Ezeugo, a former local government councillor, said he only survived because the herdsmen left him for dead after inflicting severe machete cuts on him.

Several victims in critical conditions were observed in various hospitals in the Nsukka area.

A youth, who spoke with one of our correspondents, said the herdsmen stampeded the villagers out of their homes by shooting at houses.

“Those who were caught were taken into the bush and slaughtered with machetes,” the youth said.

Our correspondent observed that the community appeared deserted with several villagers leaving the area with their luggage.

Meanwhile, the Enugu State Police Command said it was investigating the incident.

The Police Public Relations Officer, Ebere Amaraizu, who said this on Tuesday, however, said six persons died in the attack.