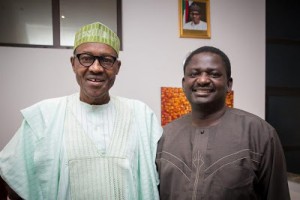 Special Adviser to President Buhari on Media and Publicity, Femi Adesina has revealed president Buhari’s take on the recent attacks by Fulani herdsmen in some parts of the country.
“Maybe you didn’t hear the President when he spoke. When the Agatu crisis happened, he decried it and said he was going to ask for security briefing on it and something will be done. And when we were in Qatar, Aljazeera did an interview with the President, and the matter came up and the President spoke on it. He said this herdsmen and farmers clash is as old as time and it is endemic in the country. He said that something would be done about it. The Federal government, the state governments and even the local governments will consult, and that was how this ranches idea came out. What I see in Nigeria is that at times people want a talkative President that is speaking every day and he will speak to a point that people are even tired of hearing him. The Presidency is the last point in any country but in Nigeria, they want to make it the first point of comment. No, it should not be like that. I remember that when the Mile 12 crisis happened in Lagos, the crisis had been curtailed, Governor Ambode had done more than what was necessary, he had even made a broadcast. And somebody called me, asking why the President has not spoken on Mile 12 crisis. Are we not in a federation again? Why should the President speak on Mile 12 crisis where there is a Governor in the state and he had handled the issue satisfactorily?”he said