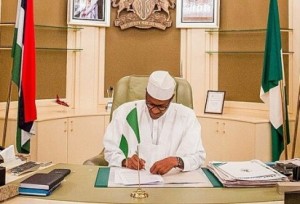 The executive and the legislature arms of government have reached a consensus that the 2016 budget be signed not later than next week.

Senate President Bukola Saraki disclosed this to State House correspondents on Tuesday night, April 26, shortly after a meeting President Muhammadu Buhari held with the leadership of the National Assembly.

The Senate president said the meeting agreed on the way forward to the budget impasse and that the process would be completed in few days’ time.

He said: “We just finished a meeting with the president and the vice president. We came to let them know some of the solutions that we found in moving the budget process forward and we are happy to say that we have agreed on the way forward and we believe that this process will be completed in matter of days rather than weeks.”

“So it is good to Nigerians and all of us, we have found a way forward; and in a meter of days, the budget will be ready for president’s assent,” he said.