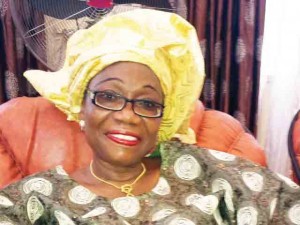 A chieftain of the All Progressives Congress and a onetime Senator has been kidnapped in Ogun State
Senator Iyabo Anisulowo, who represented Ogun West Senatorial district between 2003-2007 at the Senate, was kidnapped alongside her security aide in Igbogila area of the state.

Confirming the incident, the spokesperson for the Police in the state, Muyiwa Adejobi, said they got the report on Wednesday evening and that the Commissioner of Police in Ogun State, Abdulmajid Ali, had dispatched teams to the area for the rescue operation.

He assured the public, particularly her relations and those concerned, that she would be rescued unhurt and that the perpetrators would be apprehended.

Confirming the incident, the spokesperson for the state police command, Muyiwa Adejobi, said the state commissioner of police is aware of her abduction and efforts are being made for her to be released unhurt
“The Ogun State police command is aware of the kidnapping of Senator Iyabo Anisulowo in Ilaro area today around 6pm. The Commissioner of Police Ogun State CP Abdulmajid Ali has detailed five teams to the area to rescue her unhurt.
The special Anti-Robbery Squad SARS, and Anti-Kidnapping Squad Commanders have been sent to the area by the CP to rescue the senator and apprehend the perpetrators. We have also embarked on scientific investigation of the matter” he said.
iyabo anisulowo politics slideshow 2016-04-28
Younews Ng
Share