Suitor Stabbed MTN Staff To Death For Rejecting Wife No 2 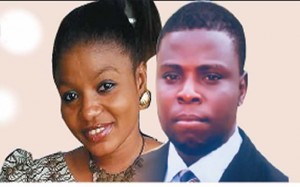 Tragic killing by a dreamy lover whose love overtures we  unreturned happened on Sunday, April 24, at  Ilorin Kwara State in the family of Ashinwo..like a sceen from movie.

He had stabbed multiple times, along with her mother, who was trying to ward off the attack on her daughter in a flat she rented at Tanke area of Ilorin, Kwara State.

As of the time of filing this report, Oluwatosin’s mother was still in intensive care at  a hospital in Ilorin where she had undergone a round of surgery to repair the extensive damage caused by the knife attack on her body.

In fact, one of Oluwatosin’s brothers, told our correspondent that their mother was stabbed more than his sister but she survived to tell the story.

For her sister, the story is grimmer. She had bled to death by the time help came.

The story that culminated in the tragedy that has befallen the Ashinwo family started late last year,

Oluwatosin, who was a customer care executive with telecommunication company, MTN, had just been transferred from Kano to Kwara State when she met Ogundele.

Our correspondent was told that while Ogundele had a massive crush on the young woman, she had other things on her mind.

“My sister did not love him back and she did not hide it. He did everything to win her love but she just did not like him back,”  one of Oluwatosin’s brothers told our correspondent.

Soon, Ogundele was said to have reached out to the young woman’s siblings with the hope of winning their approval and convincing their sister.

Oluwatosin’s brother said, “At a time when I was in Ilorin at the end of last year, I visited my sister one evening when the man came around. I saw him a second time, two weeks after that in December. I did not ask my sister about him because I knew she was old enough to handle her affairs. But it was clear my sister did not like him.

“My sister used to tell me that he works at Omu Aran. She said the man would always pester her that he wanted to marry her.

“There had been pressure from my mother and other family members for her to get married but she always liked to handle her issues herself. She was the one who sponsored my university education. She was very hardworking. Even apart from her MTN work, she was still selling shoes and bags on the side.

“It happened that the man (Ogundele) got the numbers of my brother and I somehow.”

The screen capture of one of such messages shown our correspondent, reads, “Your sister is giving me a serious headache. I don’t know what to do. I love her so much but…Join me in prayers that God should soften her heart.”

In another text message he sent to one of the brothers, Ogundele wrote, “I am at the health centre now. It is your sister’s behaviour that landed me there o. Always thinking (sic) I covet your prayers for survival. If I die, I die for love. You can’t understand.”

At this point, the brothers reached the conclusion that the man was terribly obsessed with their sister, who insisted that she was never going to get into a relationship with or marry him.

It became clear that Oluwatosin’s mind was made up when Ogundele undertook the most unexpected and shocking step of organising a big birthday  party for the young woman when she clocked 30 in February.

Apart from organising the birthday, he bought a Toyota Matrix as a birthday gift.

As the birthday ceremony started, Ogundele reportedly put a call across to Oluwatosin to come. She never showed up.

“If my sister had accepted the gift, it would have been the same as accepting his proposal. He felt so bad about it,” the deceased’s brother said.

This was said to have infuriated Ogundele, whom they said felt ashamed in the eyes of the guests he had invited to the party.

Oluwatosin’s brothers said her resolve was more affirmed because she had learnt that Ogundele was married already.

After Ogundele established contacts with Oluwatosin’s siblings, he went ahead to get in touch with their mother too.

“He kept disturbing my brother. My brother initially felt pity for him for the disappointment when he told him he bought a car for my sister but she still disappointed him. When he got my mother’s number, I explained to my mother that he was not the kind of person my sister could marry. My mother decided to tell him that there was nothing she could do about that because she could not force a man on her own daughter to marry.”

On Saturday, their 53-year-old mother travelled to Ilorin to visit Oluwatosin.

That was when she learnt that there had been an incident recently which Oluwatosin did not tell them.

“I called my mother that day and she told me that she was happy that she visited my sister. She said the man (Ogundele) threatened my sister. My mother said my sister told her that the man held a knife to her neck and collected her ATM card and withdrew money from her account.

“My sister told mom that the man threatened that if he did not marry her, he would waste her. We could not finish that conversation that day.”

Then between 8am and 9am on Sunday, the Ashinwo’s worst nightmare came true. Ogundele made good his threat.

Ogundele showed up and an argument ensued, during which Oluwatosin insisted the man must leave her house.

But rather than leave, in anger, he ran into the kitchen and grabbed a knife.

By the time, he was done, the two women, Oluwatosin, and her mother, who tried to stop the fight, had both been stabbed multiple times.

It was learnt that Ogundele locked his victims in the room, thinking that they were both dead., other tenants were not around.

But unknown to him, Oluwatosin’s mother survived and she alerted a trader who had a shop in front of the compound.

The severely injured woman, who had managed to narrate a little of what happened, said she watched as her bleeding daughter breathed her last, as Ogundele locked them inside and fled.

She was later rushed to the hospital where doctors performed an emergency surgery to save her life.

Photographs of the scene of the attack, which were shown our correspondent, showed patches of thickened blood which had turned the white tiles red. The photographs gave an insight into the brutal attack that took Oluwatosin’s life.

Conversation with killer on the run

In a shocking conversation our correspondent struck with the alleged killer (Ogundele) on WhatsApp, he simply rationalised his act by saying “I was bewitched.”

Asked if Oluwatosin provoked him, he said, “It is well.  What can I do now? I was bewitched. How would I attack a lady I claim to love?”

At what point did he think he was bewitched?

“When you did something you never wanted to do that’s how you’ll know. Tell me what to do please,” he said.

Asked what caused the argument in which he stabbed Oluwatosin and her mother, he answered “Please, tell me what to do.”

Our correspondent told him that if he refused to explain what happened, people would read the report and view him simply as a cold-blooded killer, he answered, “At least I will appear in one of the most read newspapers in Nigeria.”

Asked why he did not simply hand himself over to the police, rather than run, he said, “I am in Ilorin, airport area. I am not running.”

He was asked why he stabbed Oluwatosin’s mother too, he denied it and simply said, “Never”. When told that the woman survived, he said, “Thank God for her life.”

When he was told that the more he stayed in hiding, the more he would look guilty, he replied, “Now you are talking.  Is she really dead? Okay. I will hand myself over to the police tomorrow in Ilorin, trust me. She is dead, let me die too.”

Our correspondent later sent him one of his pictures earlier taken from his Whatsapp profile to let him know that his identity was known.

“That’s not my present picture though. I keep an afro now. Long hair. Where are you now?” Ogundele said.

He later signed off the conversation and said, “Talk to you later.”

The case was initially reported at the F Division of the Kwara State Police Command, which is located few metres away from where Oluwatosin lived.

The spokesperson for the Kwara State Police Command, Mr. Ajayi Okasanmi, confirmed that the police are on the trail of the suspect.

Investigators have visited a private university where Ogundele is said to work, but his colleagues said they had not seen nor heard from him since the day before the incident.