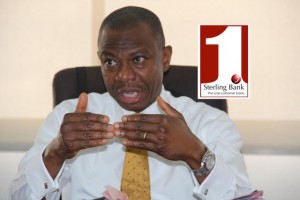 The Managing Director, Sterling Bank Plc, Mr. Yemi Adeola, has said the need for the Deposit Money Banks to be cautious in this era of economic pressure cannot be overemphasised.

This, according to him, should not deter banks from making business progress and growing shareholders’ wealth.

Adeola, in a statement released by the lender, said the bank rode on the back of improving internal efficiency to reduce funding costs and improve profitability of its core banking operations in the first quarter of 2016.

Key extracts of the unaudited report and accounts of the lender for the period ended March 31 2016, showed appreciable improvements in core underlying fundamentals, although macroeconomic and industry headwinds subdued overall performance.

He said the bank adopted a cautious but progressive approach to business due to the challenging macroeconomic conditions.

According to him, the subdued crude oil prices, fuel and power supply disruptions, as well as significant foreign exchange shortages have persisted, increasing the cost of doing business and heightening the pressure on household income.

The Sterling Bank boss said that as the nation’s inflation rate witnessed an uptick from 9.6 per cent in December 2015 to 12.8 per cent in March 2016, the resultant monetary tightening measures could further challenge the operating environment.

The report indicated that net interest margin, which measures the profitability of a bank’s lending operations, improved to eight per cent in the first quarter of 2016 as against 7.4 per cent recorded in the comparable period of 2015.

Major highlights showed the bank’s net interest income increasing by 24.7 per cent to N11.4bn in 2016 as against N9.2bn in 2015. This was driven by a 14.4 per cent decrease in interest expense, resulting in a 940 basis points improvement in net interest margin to 56.9 per cent.

However, profit before tax declined by 30.6 per cent to N2.8bn in 2016 as against N4bn in 2015. But when adjusted for non-recurring items, which would have brought the 2015 figure to N2.7bn, the 2016 figure represents a three per cent increase on fourth quarter 2015 and 2.4 per cent improvement over the same period last year.

While profit after tax on the face of it declined by 35 per cent to N2.5bn as against N3.9bn in 2015, adjustment for non-recurring items would bring the 2015 first quarter figure to N2.6bn. This depicts a marginal decline of 2.6 per cent.

Adeola said, “We are confident that our goals for 2016 will be met despite the subdued outlook for the Nigerian economy.