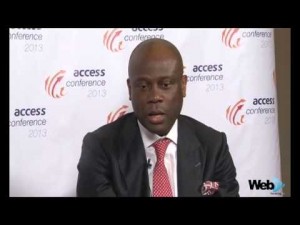 The Access bank Managing Director (MD), was recently declared free of all doubts by the anti-graft agency in its investigation of the slush fund scandal involving some bank chiefs and former Minister of Petroleum Resources, Diezani Alison-Madueke.
Although Wigwe was invited by the EFCC for questioning in respect of an ongoing investigation, it was discovered that he had no hand in the scandalous transaction

The EFCC also absolved him of complicity in the slush fund scandal involving Diezani and other bank chiefs. Findings revealed that Wigwe never had contact with the former petroleum minister. He did no business with her and he never had cause to hobnob with her in same business and social circuits.

‘As head of Access Bank, Wigwe understands the need to abide by the company’s corporate philosophy which is to become the world’s most respected African bank thus he would never engage in any act or association that would be inimical to the progress and good image of his organisation’..a source who knows Wigwe and his ethical approach to banking told yonewsng.com.

Wigwe started his professional career with Coopers and Lybrand Associates, an international firm of Chartered Accountants. He spent over 10 years at Guaranty Trust Bank where he managed several portfolios including Financial institutions, Corporates and Multinationals. He left Guaranty Trust as an Executive Director to co-lead the transformation of Access Bank Plc in March 2002 as Deputy Managing Director.