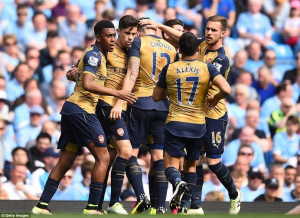 Arsenal solidified their spot in third place as they secured a well deserved 2-2 draw against Man City while Real Madrid continued its search for a La liga title with a comprehensive 3-2 win over Valencia.
The draw puts Man city;s champions league qualification hopes in doubt as two wins from Man U will guarantee Man United a top four spot, while Spurs will likely only need a draw now to seal second place ahead of Arsenal.
Danny Welbeck and Olivier Giroud started upfront for Arsene Wenger’s  men and provided an assist and a goal as Arsene Wenger’s men gave Man City manager Manuel Pellegrini a gloomy sending off- as today was his last home game as coach of Man City before Pep Guardiola replaces him in the summer.

Sergio Aguero put Manchester City into the lead in the 8th minute with a well-taken strike at the Etihad but Arsenal hit back immediately when Olivier Giroud leaped to head home a corner past goalkeeper Joe Hart. 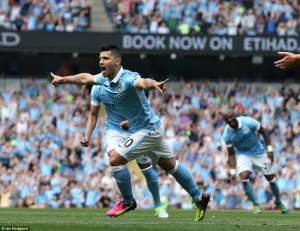 Danny Welbeck injured his knee in the first half and limped off after he clashed with Bacary Sagna and the first  half ended in a stalemate but Belgium playmaker Kevin De Bruyne regained City’s lead few minutes after the restart with a marvelous solo goal.

Man City’s fans expecting a smooth roll into the champions league qualifying spot for next season were given the shock of their lives as Arsenal starman Alexis Sanchez scored Arsenal’s second goal after linking up well with Giroud before sending Hart the wrong way.

Man City will have to win their next match and pray Man U do not win their next two matches to ensure they qualify for next season’s Champions League.

In the second big match of the day, Real Madrid defeated 11th placed Valencia 3-2 to ensure they become second on the La Liga table, with just a point keeping Real Madrid away from Barcelona at the summit of the Spanish La Liga table as Barcelona thrashed Espanyol 5-0. 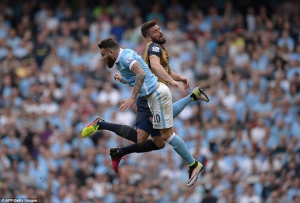 Cristiano Ronaldo was in dazzling form for Real Madrid as he scored twice for the hosts in an entertaining goals-filled game that stretches the La Liga title race to the wire.

As the first-half progressed, Real gradually found their rhythm and took the lead through a Ronaldo goal after 26 minutes.Marcelo found space on the left to fire the ball into the feet of the Portuguese forward, who left Aymen Abdennour in his wake and fired into the bottom corner to give Los Blancos the lead.
Frech forward Karim Benzema, who has been ruled out of EURO 2016 for a sex tape scandal, then made it 2-0 just before half-time.
Confusion surrounded Benzema’s finish after he appeared to be offside and Abdennour went down injured during the build-up, but it didn’t matter as Zinedine Zidane’s team headed to the dressing room deservedly in front. 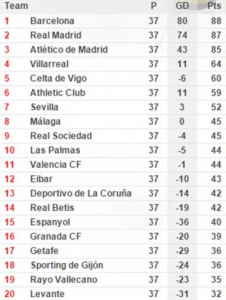 Valencia, however, had other ideas and stunned the Bernabeu on the 55th-minute mark, with Rodrigo Moreno firing in to make the deficit just one.It didn’t last long, though, as Ronaldo scored his second of the game three minutes later, rifling a left-footed shot past Diego Alves.