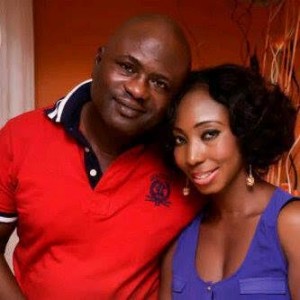 He was arrested on Monday by operatives of the Rapid Response Squad (RRS) in Lagos.Lekan Shonde, the man who allegedly beat his wife to death last week and has been on the run since then has been arrested by Officers of the Rapid Response Squad this afternoon in Lagos.
Lekan who spoke  from hiding denied that he killed his wife..and then said..he
concluded by saying that he is a Lagos by and can be in Lagos for 30 years without being found

Shonde alleged that his deceased wife, Ronke provoked him by describing vividly how her lover slept with her in a hotel in Abuja.

The man was accused of killing his wife at their Idimu-Egbeda home last Thursday.

He reportedly fled the scene after the incident, leaving behind their two children.The man who allegedly killed his wife in the Egbeda, Lagos area, Lekan Shonde, had reportedly said that his wife, Ronke provoked him by describing vividly how her lover slept with her in a hotel in Abuja.

Lekan, a depot worker in the Apapa area of Lagos State, said his wife of eight years changed after she allegedly started dating the general manager of a publishing company.

The Abeokuta, Ogun State indigene, said he regretted marrying Ronke, explaining that his late mother had warned him against the union, but he never listened.

Scroll down for Video……
Our correspodnent had reported that Lekan and his wife, Ronke, lived on Tiemo Close, Off Awori Street, in the Egbeda-Idimu area.

The marriage, which was blessed with two children, aged six and four, was said to have been marred with domestic violence.

The crisis culminated in the death of Ronke on Thursday, after which her husband fled the house and locked up the children with their dead mother.

He said the last time he beat his wife was three years ago after a disagreement, saying he had never touched her afterwards.

He said, “Since I married my wife eight years ago, she has never bought anything into the house. I gave her N5,000 on Saturdays and N3,000 on Tuesdays for soup. I also gave her money to make her hair.

“She was working with GTB as a marketer, but she got sacked three years ago. For that period, I was the one feeding her and taking responsibility for everything in the family. I would wash her pants, bathe the children and buy foodstuffs in the house. She later got a job with a publishing company owned by her uncle.

“But my wife changed sometime in March, when she started dating the general manger of a publishing company. My wife was going to the office from Monday to Sunday and she wasn’t going to church again, all because of this man. She called him ‘Eyitemi’ (My own).

“When she came back, she didn’t know I was inside the house. She started talking with the man on the phone that he really had fun with him and I didn’t know how to make love.  She again said her private parts were paining her.”

He said he confronted his late wife and she confirmed that she was dating the other man, adding that she asked her to concentrate on a relationship.

Lekan said his wife refused to leave the house despite his insistence on her leaving.

Recounting the incident of that night which led to her death, he said they had had an argument over money.

“I was angry because for the past three months, she didn’t allow me to have sex with her. I pushed her hand away from me on the staircase and I left her. She never tumbled or fell. In fact that night, I bought the food that we both ate because she said she didn’t want to cook.

“I didn’t know anything had happened to her until Friday when I saw her on the staircase. I thought she was still pretending. I just left her and walked away.”

Asked why he shut the gate against his children, he said he never did, adding that it was his son that closed that gate.

Lekan also denied taking the victim’s phone away, saying he left it on the bed.

He said he had no reason to kill his wife, adding that  he bought her two cars and always provided for her needs.

He said, “Jide, her family’s second child lived with me for three to four years. Their eldest daughter, Bolatito, has lived with me too.

“Although I am not a saint, I don’t drink, I don’t smoke. I am a responsible man. The problem with my wife was that she was temperamental. She shouted at me whenever she talked.

“I am a Lagos boy and I can be in this Lagos for the next 30 years and nobody would see me.”

Meanwhile, Ronke’s sibling, Bolatito, said their mother had just arrived in Lagos from Ilorin, Kwara State, adding that the family would not want to talk about the incident yet.

Our correspondent gathered that Ronke’s brother and the second born of the family, died in a ghastly motor accident in Abuja.

Bolatito, who is the first born, is the surviving child of three children.

She said, “My mother just arrived from Ilorin and the family wants to devote time to attend to her; we don’t want to talk about the incident. I am not in the right frame of mind to talk.

“But all I want to say is that her husband is somewhere out there and has been calling. The police should reach out to the telecommunications company to know where he is. He called me and he said he wanted to see me.

“He also said he wanted to see his children and I should tell him where they are because we might never see him again.”

The aunt of the victim, Bunmi, explained that the suspect had been threatening suicide, saying their mother had forgiven him.

She said, “Mummy is very sad with this, but she has forgiven him and does not want him to commit suicide.”

A family source said that the domestic violence had been on for some time, saying at a point, the matter was reported at a police station.

He said the suspect always accused his wife of extra-marital affair.

He said, “He always beat her because of his belief that she was into an extra-marital affair.

“The beating reduced a bit when the wife of her late brother who was one month pregnant before his death, moved into the house with them. She stayed for about eight months. She was like her saviour.”

The Convener of the Women Arise for Change Initiative, Mrs. Joe Odumakin, while condoling with the family, said the group would pursue the case till the end.

She said, “I am shattered and heart-broken. Their mother had been a widow since they were all little and she has lost two of three children in less than one year. And it is hard to believe that the killer husband has been chatting with people, asking to see his children and blatantly lying that he only slapped her.

“Neighbours must learn to intervene when they hear unusual noise. And women, who are in abusive relationships, must speak out before it is too late. Lekan should come out and submit himself so he could be tried in a court, where he will have the chance to prove his innocence.”