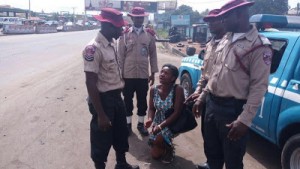 The Federal Road Safety Commission FRSC has dragged a woman identified as Ndidi Amehia Eleazar, before a magistrate court in Ota for biting the thumb of an officer at the Lagos-Abeokuta expressway tollgate on Wednesday May 11th.

She thereafter sat on the bonnet of her car to evade arrest.