The Minister of Information, Culture and National Orientation, Alhaji Lai Mohammed, has written the National Broadcasting Commission requesting a ‘loan’ of N13, 120, 470 (Thirteen Million, One Hundred and Twenty Thousand Naira).
The ‘loan’ is to enable the minister and his team travel to China on assignment that is reportedly in national interest.
A copy of the memo seen by our correspondent dated May 11, 2016 addressed to the acting Director-General of the NBC, Alheri Saidu, and signed by the Director, Public Relations and Protocol to the Minister, Dama N.P.D, said the ‘loan’ will be repaid as soon as the Ministry receives its allocation from the 2016 budget.
The memo also attached approvals from the Permanent Secretary and Mr. Mohammed.
The ‘loan’ raises questions of probity, accountability and adherence to laid down rules and regulations as the NBC is a government-funded organization, not a financial institution, which the Ministry could have easily approached to obtain a loan to be repaid in full with interests at prevailing rates.
See the Memo: 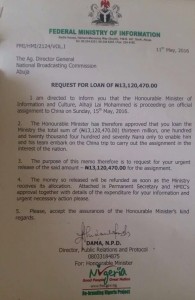 Previous Magu not in contempt of court,As EFCC Recovers $3.1bn In 6 Months
Next President Buhari, Cameron and Corruption By Reuben Abati