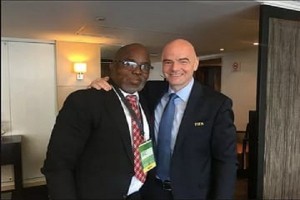 Elected as the new FIFA president during the 2016 FIFA Extraordinary Congress on February 26, Gianni Infantino has promised to be in Nigeria shortly to watch the finals of the NFF/Zenith Bank Championship game,

FIFA President Infantino made the promise to NFF President Amaju Pinnick during the ongoing 66thFIFA Congress in Mexico City. Pinnick revealed during the weekend that Infantino considers Nigeria a massive soccer nation that should assist FIFA to manage and develop football games around the world.

“He sees a lot of potentials and dynamism in the current NFF leadership and says he would love to work with the NFF for the general development of the game,” Pinnick stated.

Although the exact date of Infantino’s visit has not been announced, Pinnick reveals the world football administrator will pay a courtesy visit on President Buhari, watch the finals of the NFF/Zenith Bank Future Eagles Championship, hold a session with Corporate Nigeria, and also meet with various African FA presidents who will be on hand to receive him to Nigeria.
Mallam Shehu Dikko, Chairman of the League Management Company (LMC), confirmed this development  by stating that “I want to let Nigerians know that NFF president had a chat with Infantino during the current FIFA Congress in Mexico,” and that Infantino praised the NFF for being able to attract La Liga to partner with leagues in the country.
FIFApresident INFANTINO slideshow zenith bank 2016-05-17
Younews Ng
Share