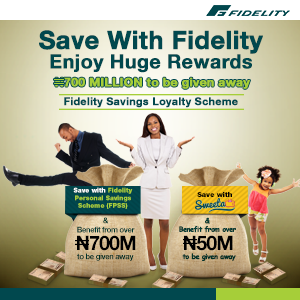 Mrs. Clara Ibedu, who won the star prize of a house, was presented the house yesterday in Lagos, making her the third customer to have won a house, with two other customers of the bank, Hadiza Sulieman and Edozen Adodo winning in Abuja and Port Harcourt respectively.

The Executive Director, Lagos and Southwest, Mrs. Nneka Onyeali-Ikpe, said the Save-4-Shelter savings promo was borne out of the urge to reduce the housing gap witnessed in the country by encouraging people to save and in the process be rewarded with a good shelter.

Onyeali-Ikpe said: “The Idea is to stop people from paying rent by winning through the promo and we will continue to do that as people need to be able to get suitable accommodation for themselves because we believe that shelter is a vital aspect in life.”

She said aside the need for shelter, the lender also wants its customers to have savings culture, as savings for the rainy day is a good initiative meant to be undertaken by all.

“I feel good that we have come to the end of this draws and the fact that we kept our words to our customers as over N35 million was spent on the promo with various consolation prices to satisfy all our customers, who participated in the draws. There was something for everybody and I am also very happy because our customers have been very loyal and we will continue to reward them,” she said.

Mrs. Clara Ibedu, a business woman, was excited after the bank presented the star prize of four-bedroom duplex to her. Ibedu said she never expected it to be true as she thought it was a scam. “It was not looking real at first, but today I have come and I now believe it as it shows that savings pay,”she said.

Speaking on the promo, the bank’s Managing Director/CEO, Nnamdi Okonkwo explained that all the bank’s customers needed to do was open an account with a minimum deposit of N20, 000 or top up existing accounts with incremental N10, 000. “This makes you eligible for the monthly draw. The savings account could be any in the savings bouquet, which include the Fidelity Savings Accounts (FSA), Fidelity Personal Savings (FPSS), SWEETA among others.