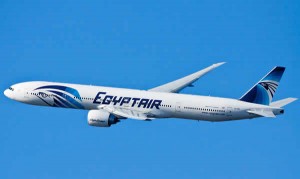 An EgyptAir flight, MS804, with 66 passengers on board went missing in the early hours of Thursday over the Mediterranean en route from Paris to Cairo, Egypt.

The Egyptian Civil Aviation Minister, Sherif Fathi, said the crash was likely caused by a terror attack rather than a technical error, USA Today reports.

The flight was said to have made two sharp turns before it suddenly lost altitude and vanished from radar.

Greek authorities had found floating materials, including life vests, likely to be the wreckage from the plane, adding that the debris was found near the Greek island of Karpathos.

French President, François Hollande, confirmed the disappearance of the airliner but said it was too early to determine the cause of the crash.

Egyptian and Greek authorities said the plane likely went down near the Greek island of Crete. Greek TVreported two floating orange objects that could be airplane debris were spotted in the ocean 50 miles south-east of the area where the plane vanished from radar about 174 miles off the Egyptian coast.

Greek civil aviation authorities said all appeared fine with the flight until air traffic controllers were preparing to hand it over to their Egyptian counterparts. The pilot did not respond to their calls, and the aircraft then vanished from radar just after entering the Egyptian airspace.

About 40 minutes before the plane vanished, Greek air traffic controllers said the pilot reported no problems as he flew over the Greek island of Kea, according to a statement by the Hellenic Civil Aviation Authority.