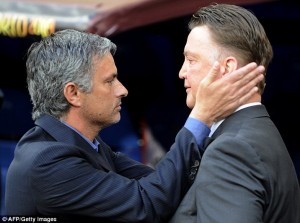 Manchester United have reportedly sacked manager Louis van Gaal and his Dutch coaching staff following a two-year spell at Old Trafford.
The 64-year-old has been on the brink of dismissal for some time due to United’s lacklustre Premier League campaign.
The club missed out on Champions League qualification as they finished fifth in the table, but Van Gaal guided the team to their first FA Cup trophy since 2004.
Shortly after United won the silverware on Saturday, it was widely reported that the Dutchman would be replaced with Jose Mourinho, who has been linked with the Old Trafford hotseat since his sacking from Chelsea in December.
Today, Van Gaal arrived at United’s training complex in Carrington and was shortly followed by employment lawyer Paul Gilroy QC, who acted for David Moyes when he was sacked by the Red Devils in 2014.
According to the Daily Mail, the axe has now fallen on Van Gaal, who will leave the club with immediate effect, along with his Dutch backroom staff, including assistant coach Albert Stuivenberg and goalkeeping coach Frans Hoek.
It is believed that Mourinho could be installed this week as the new United manager as he will reportedly finalise a three-year deal on Tuesday.