Omisore Reacts To EFCC Declaring Him Wanted Over N700m 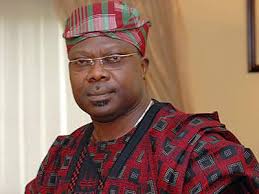 The former Osun state deputy governor who was declared wanted today by EFCC for receiving N700 million from the office of the former National Security Adviser, NSA, has released a statement describing the EFCC’s action as blackmail. Read the statement below..

I read the statement issued by the Econimic and Financial Crimes Commission (EFCC) purportedly declaring me wanted as an attempt by that organisation and its leadership to tarnish my image. That statement, if indeed it was issued by the EFCC, is the height of mischief and a deliberate attempt to assassinate my character.

It is now very clear that the EFCC is indeed playing out the script of persecuting and harassing perceived opposition groups in the country. To be sure, there is no basis for the EFCC so-called statement. Only on Tuesday, May 24, we appeared in court with the EFCC asking for the permission of the court for an extension of time in the preliminary objection to a suit filed against me.

The company has even sued the ONSA for its inability to pay the balance of the contract so awarded to it. Therefore, I am not aware of any issue relating to a contract sum of N700 million. There was no issue of N700 million anywhere.

The relationship between the company and ONSA is civil and contractual, which has nothing to do with me. Besides, so long as their business transactions are legitimate and since I am not directly managing the company, how am I to know who and who they do business with? The EFCC should not be seen playing the role of political victimisation of innocent individuals, coercion and blackmail. Sadly that is simply what this organisation has been doing. Blackmail, I strongly believe, won’t help EFCC.

If the organisation and its leadership think they have any case against me, they should come to court with their facts. This act of blackmail and deliberate tarnishing the image of perceived political enemies won’t help the image of the EFCC and it won’t get it result.

How can you declare someone you were in court with at 9.00a.m today wanted the same day, a few hours afterwards? I am appealing to all human rights and civil society organisations to caution EFCC from damaging my reputation further. If they have facts, I challenge them to bring them to court and not resort to blackmail, intimidation and victimisation.

The Economic and Financial Crimes Commission(EFCC) yesterday declared a Deputy Governor of Osun State, Senator Iyiola Omisore wanted in connection with alleged N700million paid to a company in which he has interest by the Office of the National Security Adviser(ONSA).

The said money was paid to the ex-Deputy Governor when ONSA was under the administration of a former National Security Adviser, Col. Sambo Dasuki.

The cash was allegedly paid between June and November 2014.

A statement by the Head of Media and Publicity of the anti-graft commission, Mr. Wilson Uwujaren, said: “The EFCC today declared a former Deputy Governor of Osun State, Senator Iyiola Omisore wanted.

“The former senator is wanted in connection with a case of receiving and misappropriating the sum of over N700, 000,000.00 from the Office of the National Security Adviser (ONSA) between June and November, 2014.

“Omisore has been elusive and refused to report to the Commission after invitation was extended to him on April 7, 2016 requesting him “to come and make clarification on the ongoing investigation”.

“Instead of responding to the Commission’s investigation Omisore had approached the Federal Capital Territory High Court for the enforcement of his fundamental human rights.

“Justice Husseini Baba Yusuf consequently ordered that Omisore should only be arrested through a due and legal process.

“The EFCC thereafter obtained a warrant to effect the arrest of the politician.”

As part of the N700million probe, the EFCC had invited Omisore for interrogation in connection with a N442, 600,000 security contract which was awarded to a firm linked to him by the ex-NSA

Omisore was a director of the company as at the time of the award of the contract and a payment of N370million out of the project sum was effected.

Part of the N370million was allegedly made into the account of the ex-deputy governor.

Based on the recommendation of a Presidential Committee, EFCC was scrutinizing records of how the contract was executed with nothing to show for it.

The letter, signed by Abubakar Madaki on behalf of the Acting Chairman of EFCC, reads in part: “The commission is investigating an alleged case in which your name featured prominently.

“In view of the above, you are kindly requested to interview the undersigned on Monday, 11th of April 2016 at No.30, Harper Crescent, Wuse Zone 7 at 10am.

“Your cooperation in this regard is solicited.”

Previous Big Endosement ! :UBA Gets BUY Rating On Stock
Next Oshodi transformation will depict the new face of Lagos – Ambode