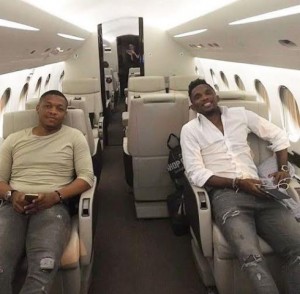 Football legend Samuel Eto’o came into Nigeria yesterday to honour Joseph Yobo in his testimonial match which took place in Port Harcourt, Rivers state. He came in his private jet and after playing in the match, Samuel Eto’o, who wanted to fly back immediately, was unable to do so as his private jet was not allowed to fly out. The Airport authority claimed he didn’t have permission to land at the Port Harcourt airport and fined him. And according to a  source, after paying the fine, his plane was still not allowed to fly, up until late last night.
As of 1am early this morning, government officials and friends of the footballer were still trying to get his plane to leave the airport.